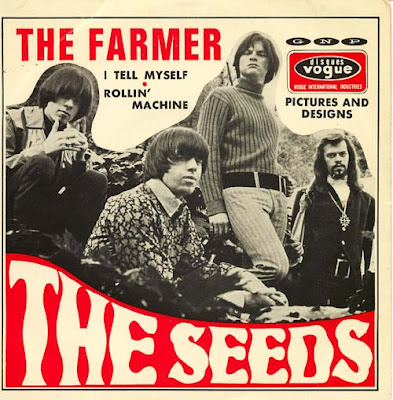 Some highlights from this month's listening...

1. The What Four – “I’m Gonna Destroy That Boy” (1966)
Guitarist Cathy Cochran from this New York group said their records sounded “like an all-girl choir from a detention home”. Nice description, fabulous record.

2. Darrow Fletcher – “My Young Misery” (1966)
Darrow was aged between eleven and fourteen when he wrote then recorded this astonishing belter. A full collection of the material he scattered across several labels during the 60s and 70s is long overdue as I’ve not heard a bad one yet, and don’t expect to when he appears at the 100 Club on the 1st of November.

3. Sarah Jane – “Listen People” (1966)
Many thanks to Bill from Anorak Thing for turning me on to this lovely Brit-folk single.

4. The Seeds – “Rollin’ Machine” (1966)
No other so-called garage band had as many brilliant songs as The Seeds. Their closest competitors had three, four or five. The Seeds had thirty or forty. I’ve picked this one at random. I wish Sky Saxon was still with us.

5. Big Daddy Green – “Who Done It” (1970)
From Louisiana, and he sounded like a big fella. What separates “Who Done It” from other swampy R&B 45s is the fuzz guitar that weaves its way through the grooves.

6. The Soul Children – “I Don’t Know What This World Is Coming To” (1972)
Public Enemy famously sampled the “Brothers and sisters” introduction for “Rebel Without A Pause” but the whole seven minutes of this Wattstax message song is funky vamping, hand clapping, testifying of the highest order (and cruelly cut from the film).

7. Bobby Womack – “There’s One Thing That Beats Failing” (1974)
There’s no bad track on Lookin’ For A Love Again and none better than this ender which with its spoken word parts, soaring strings, and soul man love throat does in a brisk three minutes what sometimes took Isaac Hayes quarter of an hour.

8. The Staple Singers – “I Want To Thank You” (1975)
The Let’s Do It Again soundtrack written and produced by Curtis Mayfield and performed by The Staple Singers doesn’t rank among the finest artistic achievements of either (despite the title track being a US Billboard number 1 on the pop and soul charts) but it’s still a collaboration made in heaven and a classy LP.

9. The Adverts – “Bombsite Boy” (1978)
I was always put off The Adverts due to TV Smith being a punk with long curly hair which was unduly harsh on my part seeing how I overlooked that thing on Bruce Foxton’s head.