PUT THE BOOK BACK ON THE SHELF: BOHEMIANS, BEATNIKS AND AN ED BANGER 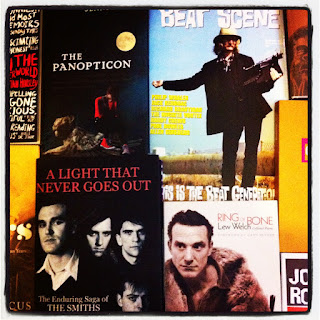 Time to rest the ears and treat the eyes.

If I were in the process of writing my first novel I’d put my quill and ink back in the desk drawer, close the lid slowly, put the kettle on, and think of another way to make my mark after reading The Panopticon by Jenni Fagan. I’d already read Jenni’s poetry in Blackheath publications The Dead Queen of Bohemia and Urchin Belle so knew what to expect theme wise but the writing in The Panopticon is truly exceptional: economical, sharp and knowing.

Anais Hendricks is 15, her adoptive prostitute mum has been murdered, and has been sent into care at the Panopticon - ”a circular prison with cells so constructed the prisoners can be observed at all times” - after being accused of her latest misdemeanour (namely landing a policewoman in coma). Given time to dig beneath all the violence, drugs, sex, and teenage bolshiness – both administered and received – Anais is revealed as a savvy, intelligent young woman with dreams of living a quiet bohemian Parisian lifestyle. The story of her and her fellow “prisoners” is, to put it mildly, tough going (I can’t begin recount the list of horrors) but is dealt with even-handedly and compassionately. It’s a book that should be read by precisely the people who won’t touch it and who’d dismiss the likes of Anais. I, naturally, was rooting for her.

Like young Hendricks, American writer Richard Brautigan also aggravated law enforcement agencies when he chucked a brick through a police station window back in ‘55. Although done with the intention of being arrested so he’d be fed, Brautigan got more than he bargained for when subsequently sent for twelve sessions of electroshock treatment. Jarvis Cocker presented a 30 minute documentary last week on Radio 4, Messy, Isn’t It? Brautigan shot himself in the head in 1984 and was not discovered until weeks later. Such a grisly death was at odds with the bright playful nature of his most famous work and it was great to hear admirers Holly and David from The Lovely Eggs sing his praises on the wireless. They’ll be pleased to see their man on the cover of the latest issue of Beat Scene magazine which includes an interview with William Hjortsberg, author of Jubilee Hitchhiker: The Life and Times of Richard Brautigan, a new book Beat Scene call “a monumental study, intense in detail, history leaping off the page.”

Brautigan always resented being referred to as a hippy writer after his success with Trout Fishing In America in 1967 and also fumed when A Confederate General From Big Sur linked him to the Beats. My favourite part of Beat Scene is the new book reviews which this issue includes Ring Of Bone by Lew Welch. Welch was inextricably linked to the San Franciscan branch of the Beat Generation through his association with poets Gary Synder and Philip Whalen and for Jack Kerouac’s portrayal of him as his hard-drinking buddy Dave Wain in my favourite Kerouac novel, Big Sur. Ring of Bone is a newly expanded edition that collects poems, songs and drawings and a new foreword by Synder. Welch was staying with Synder in 1971 when he took a revolver into a forest and was never seen again. It’s good to have Welch back in print and be able to add some flesh to the bones, so to speak.

One MonkeyPicks reader wrote my Beat posts were the equivalent of finding only toffees left in a tin of Quality Street – he’d eat them but only if there was no other choice. With that, and the misery above in mind, perhaps a new biography about The Smiths will cheer everyone up. They are still all alive after all. A Light That Never Goes Out: The Enduring Saga of The Smiths by Tony Fletcher is an exhaustive account of the band stretching the best part of 700 pages.  Such is the detail that it’s not until nearly page 200 that Marr knocks on Morrissey’s door looking for a lyricist. Within days they’d completed the classics “Suffer Little Children” and “The Hand That Rocks The Cradle”, which is the point I’m up to at the moment. Fletcher’s Keith Moon book Dear Boy showed what a thorough biographer he is and he’s superb here painting Manchester during the punk and post-punk era. I still find it incredible Morrissey joined Ed Banger and the Nosebleeds in 1978, a year after their “I Ain’t Been To No Music School” single. Morrissey and Marr were the song-writing perfect team, it’s almost impossible to find an unwanted Smiths track. Like dipping in the Quality Street tin and pulling out a caramel swirl every time.

The Panopticon by Jenni Fagan and A Light That Never Goes Out by Tony Fletcher are published by William Heinemann Ltd.
Ring of Bone by Lew Welch is published by City Lights.
Beat Scene is available here.
Posted by Monkey at 00:53