MOST OF MY HEROES STILL DON'T APPEAR ON NO STAMP: THE NIGHT I MET PUBLIC ENEMY 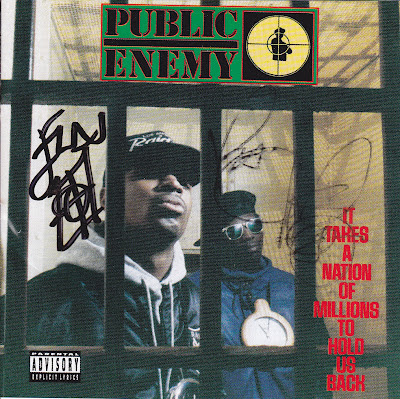 There can’t be many better record shops in the world than Rough Trade East in Bethnal Green. Every couple of weeks I come away with something unexpected. The other day I went to hear Public Enemy’s Minister of Prophecy, Chuck D,  “in conversation” but as usual came away with a lot more.

Twenty minutes before his scheduled appearance Chuck was there, browsing around the shop. I whipped out It Takes A Nation Of Millions To Hold Us Back from my bag and gently pounced as he idly thumbed the counter display. “Hey Chuck, how ya doin’ man?” That, you notice, was my street voice. “Hey,” he said, a bit like a sleepy Fonz, and offered his hand. “Would you mind signing this please?” “Sure.”  He did his thing. “What you talking about today Chuck?” He shrugged. “I don’t know. Whatever people ask me.” “Off the cuff yeah?” I began to sound like an idiot, and then added “In London long?” which confirmed it in his mind. “Excuse me?” “Are you in London long?” “Yeah,” and picks up a copy of the Creation Records DVD Upside Down and studied the contents intently. I took that as my cue. “Cheers mate.” Mates see, me and Chuck D. Not as close as me and James Dean Bradfield but mates all the same.

When he took the low stage he wasn’t alone. In tow were Public Enemy’s turntablist DJ Lord and none other than every clock repairer’s favourite customer, Flavor Flav. Chuck didn’t have anything planned to say; it was whatever came into his head and the first thing was to generously praise Rough Trade, both for the label and the store. “I don’t give accolades lightly, just for bullshit,” he said before noting the difference in this part of the East End from when he came years ago. “Back then you would’ve got slashed,” to which Flav took offence saying that he would’ve fitted in anywhere. “I’m not saying I would’ve either,” Chuck continued, “but some of you would have.” A satchel of Brick Lane hipsters shuffled awkwardly in their chinos.

When Chuck D holds forth on a Public Enemy record or in person, it leaves little room for manoeuvre or opposition. Everything is delivered with such conviction it must be The Truth. It was funny though to see how the thoughtful and serious Chuck and the World’s Oldest Teenager Flav worked off each other; like an old school comedy duo. They call themselves the Rolling Stones of Rap; they are almost the Cannon and Ball of Rap too. Chuck remained seated and spoke in a steady tone earnestly recounting facts and figures whilst Flav leap to his feet and outstretched his arms with every loud heart-on-sleeve outpouring. Their publicist mentioned Flav had slept and eaten, which I took as an unusual occurrence. The clock around his neck said 4 o’clock. It was quarter past six, so don’t ever ask him what time it is. The bespectacled DJ Lord sat stage right looking quietly amused by it all.

For around an hour they covered a lot of ground. Chuck embraced mobile phone technology as a form of communication and how it enabled people to make music and films cheaply and easily but worried “some folk are closer to their phones than their own families.” Flav was more concerned about people secretly filming him when he was eating (or worse). Chuck couldn’t understand how name DJs got paid so much money “for twiddling a few knobs” and railed against acts performed for 20 minutes. Public Enemy are all about their live shows where they “never give less than a hundred and ninety percent.”  That’s a lot of percent but when he said the group had toured 84 times and visited 83 countries there was no reason to doubt his figures. “That’s why when people ask “Have you been in London long?” I’m like, we’re always here.” Okay man, I hear ya now.

A question from the audience made them recall their performance at the Reading Festival in 1992. I was there and they were incredible. Remember the ballyhoo when Jay-Z headlined Glastonbury in 2008 and ignorant numpties were flapping how a hip-hop act wouldn’t work at a huge festival, as if people only appreciate one style of music? When PE headlined that Saturday night in ’92, coming on directly after Ride and the Manic Street Preachers they were incredible and I’m no fan of big gigs. Everyone in that muddy field was jumping so hard pints of beer were knocked over in Reading pubs. I’ve never seen an act so completely control a gigantic crowd the way PE did that evening.

Chuck acknowledged that twice during their 25 year career they’ve been buoyed by their music being used in other contexts, namely “Fight The Power” in Spike Lee’s film and now 2007’s “Harder Than You Think” being used for the Paralympics television coverage, giving them their highest ever chart placing in the UK. We still have an official chart? Come back Top of the Pops all is forgiven. He made a distinction between writing songs and making records, and also added “it’s not the artist’s job to sell records, it’s the sales people’s job to sell records. I just make them”. When asked which of his lyrics he was most proud of he said all of them but picked, as a sports aficionado, “He Got Game” for the way it mixed basketball themes with music. Not a winning combination for the Great British public. I like that song mostly for the Buffalo Springfield sample which rather proves his point about song writing and record making. Public Enemy’s strength is how they combine powerful lyrics to interesting samples – like a social, political and music history lesson in one. If people only got their education from Public Enemy records they'd do all right in life.

There was plenty more, including heartfelt tributes to Adam "MCA" Yauch from the Beastie Boys (“they were fighting for their right to party; we were partying for our right to fight”), all of which was a great but the real highlight was the live performance that followed. The lights were low, it was hot, and it felt like a private PE gig in my front room. Amazing to see and hear Chuck and Flav trade raps through a set including “Prophets of Rage”, “911 Is A Joke”, “Harder Than You Think”, latest single “I Shall Not Be Moved” and more, even if Chuck did attempt to text Mrs D mid-song. The performance of the “Fight The Power” was something else altogether.  They hadn’t even got to branding Elvis and John Wayne racists when Flav left the stage. Chuck called him back. Flavor wasn’t having it, “What you doing man? Trying to fight the power with your shit? Ah Jesus man. Fighting the power with your smell?” Yep, Chuck D had dropped his guts and an outraged Flavor Flav wasn’t going anywhere near him. A few minutes of fart gags followed – when in Britain – before the whiff cleared enough to continue. Poor DJ Lord felt the full force trapped behind his decks. I’ve seen some things in my time but Public Enemy being halted by a silent but deadly was a new one. After a couple of giggly false starts they finally nailed it.

Afterwards they posed for photographs (me and Chuck looking like couple of homies) and signed records. I thanked Flavor Flav. “No, thank you” he said and signed It Takes A Nation. “Cheers mate,” I said. “Cheers mate,” mimicked Flav in a ridiculous over-the-top Cockney accent; half way between Dick Van Dyke and Paul Hogan. We shook hands and he cackled his famous cartoon laugh.

Public Enemy’s latest album Most Of My Heroes Still Don’t Appear On No Stamp is out now and rather good it is too.
Posted by Monkey at 11:40