IN MEMORY OF THE MC5's MICHAEL DAVIS 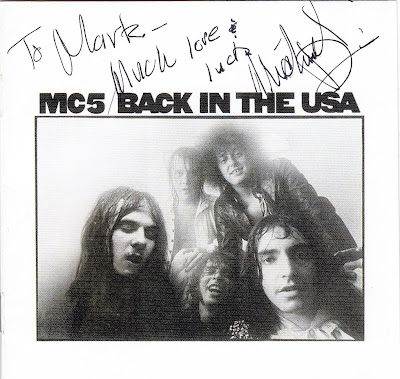 Not a week goes by without the death of someone whose records sit in my collection. My reaction is usually dependent on two things, both selfish: did they still have anything to offer musically, and did I have any personal contact with them?

In the case of MC5 bassist, Michael Davis, the answer is yes to both. Only last month I wrote about the MC5 Black To Comm boxset that documents an incredible gig from 2008. A year later I was fortunate enough to meet Michael backstage at the Dirty Water Club. Most encounters of this type tend to be along the lines of “Excuse me, would you mind if I had a quick picture with you?” Click. Done. But that night we sat quietly for half an hour chatting and drinking. He was such a mellow, laid back dude and surprisingly open and honest, it felt no subject was off limits as we discussed music, drugs, prison and a load of other stuff. I kept thinking to myself “wow, this is brilliant, remember this bit, remember this bit”. My mate Long John and I were buzzing for days afterwards. “That was MICHAEL DAVIS! Of the MC5!,” we kept saying. It was. It really was. He could’ve been an arse and I’d still love the MC5 but he wasn’t and he made me love them more.