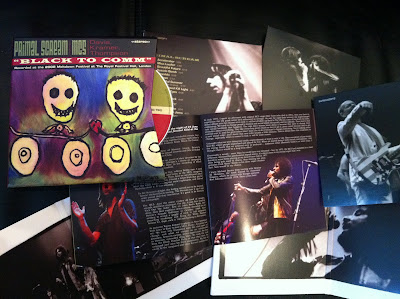 I didn’t review the Primal Scream and MC5 Meltdown Festival gig at the Royal Festival Hall back in 2008. Not because there wasn’t anything to say, more I didn’t feel equipped to do it justice. It was a rare moment when two bands from different decades and continents not only played consecutively, but simultaneously. In an era when one gig and performance is much the same as another, this was a special night that could only be fully appreciated by those in attendance. Until now. It is finally available as a three disc set: two CDs and a DVD, featuring the entire show.

Primal Scream took a while to get fully loaded. The combination of the early slot and plugging their new LP, Beautiful Future, didn’t help but the final quartet of songs “Shoot Speed Kill Light”, "Swastika Eyes", "Rocks" and "Can't Go Back" threw down the gauntlet to the MC5. Follow that motherfuckers.

With “vintage” acts it’s best to approach with low expectations and take positives rather than dwell on any negatives. With Rob Tyner and Fred “Sonic” Smith no longer with us, it could be argued it’s not really the MC5 anymore. For that reason, I massively respect the remaining members acknowledging this and insisting on being billed as MC5/DKT (for Michael Davis, Wayne Kramer and Dennis Thompson); not that anyone else calls them that, least of all me, as in my mind this was the MC5 and beyond the inescapable, contained no negatives at all. Brother Wayne Kramer in his white suit, stars and stripes Strat and freaky dancing, led the way. I’m a less-is-more kinda guy when it comes to guitar players but Kramer is a near genius when it comes to keeping Guitar Hero solos rooted in the earthy collective groove rather than flying off in spells of indulgence.

William Duvall from Alice In Chains was ideally cast into Tyner’s shadow: seven feet tall from the top of his afro to the sole of his Cubans and with a stage presence even greater. Not many can out-frontman Bobby Gillespie but Duvall grasped the crowd in his powerful outstretched fist and didn’t let go. After the Scream’s first song Bobby berated the audience with “you don’t need to stay in your seats, this is supposed to be a rock and roll concert,” - there was nobody in their seat now.

All that would’ve been enough but the half hour finale with both bands playing together took it somewhere else altogether. “I Can Only Give You Everything” is a song every garage band cuts their teeth on as they try to pick out that nagging riff. My old band, all those years ago, tried it (unsuccessfully) as we dreamt of being the MC5. You can bet your bottom dollar Bobby has dreamt it too, and there he was living out his fantasy as his flippy-floppy dance went into overdrive. It was fascinating to see the contrasting styles of Gillespie and Duvall go head-to-head as the bands laid down a holy racket around them. They ripped the bollocks out of a further two Scream songs and two Five songs, culminating in a fifteen minute John Sinclair, violin, saxophone, kitchen sink, bomb dropping, sensorial assault on “Black To Comm”. “This is liberation rock and roll,” testified Duvall. “The MC5! MC5! The MC5!” repeated Bobby, barely believing his luck.

I still can't get across how brilliant this was. At least now I don't have to.