HYPE & SOUL – BEHIND THE SCENES AT MOTOWN by AL ABRAMS 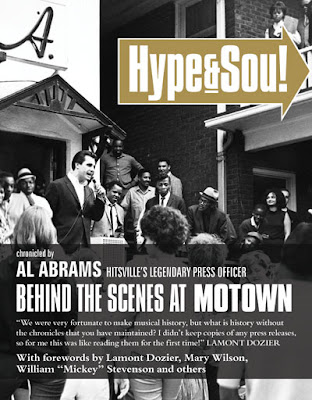 “In view of the national publicity being received by the Detroit sound – may I again request that we register ‘The Detroit Sound’ as a trademark before some 2 bit label does and this humiliates us”. So wrote Al Abrams on a Quicki-Note in the early 60s and stuck it on Berry Gordy’s desk.

That national publicity was due, in part, to the records coming out of Gordy’s Motown factory being pushed by the tireless efforts of Abrams. As an eighteen year old from Detroit, Al became Gordy’s first employee after he impressed by securing radio play for a “god-awful” pre-Motown release in 1959 ("Teenage Sweetheart" by Mike Power if you fancy looking it up). From then until 1966 he worked as a record promoter and publicist for Berry Gordy Jr. Enterprises.

Al diligently kept everything from his time at Hitsville, as can be seen in his recent book Hype & Soul: from his Quicki-Notes; to correspondence with radio and television companies; to press cuttings; photographs; ticket stubs; and exchanges of ideas with his boss. When Berry wrote that the company needed to increase its promotion of Smokey Robinson, it was Al who came up with the famous quote that’s been attributed to Bob Dylan: “Smokey Robinson is America’s greatest living poet”. When Al ran that line past Dylan’s friend and biographer Al Aronowitz asking for permission to use it, Aronowitz reasoned “If Bob sees it in print, he’ll think he said it,” which says as much about Dylan as Smokey, although I’m disappointed it isn’t quite kosher.

That Abrams was a white Jewish kid isn’t significant by today’s standards, nor was it an issue within Motown who used the best people for the job, but reading the old press cuttings race and religion were very much factors back then when newspapers felt the need to end articles with “The administrative staff is about half white and half Negro. Almost all artists are Negro”. One artist who wasn’t Negro was Tommy Good and one of Al’s more audacious publicity stunts involved having Tommy’s placard-carrying friends and family “protest” outside Hitsville demanding the release of a record by Good, in a similar fashion to the on-going civil rights marches; a risky strategy but one which earned the requisite (good humoured) column inches. Race relations and the civil rights struggle are a dominant theme running throughout the book.

Temple Street Publishing have done a beautiful job in presenting Hype & Soul as immaculately as The Temptations stepping out at the Apollo. With nearly 300 glossy colour pages of Al’s memories and memorabilia, it gives a different slant on life within 2648 Grand West Boulevard with loads of new discoveries for even the most well-read Motown fan to enjoy.

Hype & Soul by Al Abrams is published by Temple Street. To order visit http://hypeandsoul.blogspot.com/
Posted by Monkey at 12:42