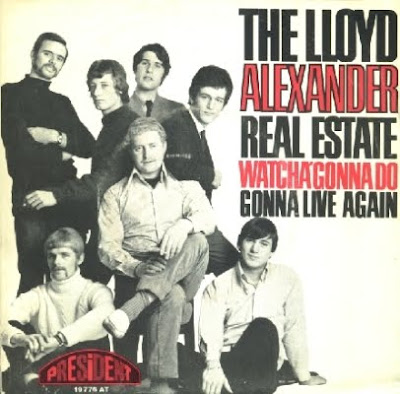 Some favourites this month.

1. Henry “The Hipster” Gibson – “Who Put The Benzedrine In Mrs Murphy’s Ovaltine?” (1944)
Mrs Murphy liked a cup of Ovaltine at night to help her sleep, until one night somebody spiked it with Benzedrine. Things were never quite the same again.

3. The Alan Bown Set – “Jeu De Massacre” (1967)
Write a bunch of songs for a soundtrack album and then stich them together to make a single instead. The result is suitably madcap not least for the playground gun-shot sounds.

4. The Lloyd Alexander Real Estate – “Watcha’ Gonna Do (When Your Baby Leaves You)” (1967)
Swinging club soul from the Far East: Hackney.

5. Grahame Bond – “Moving Towards The Light” (1968)
By 1968 Graham had taken an E and in his music was all sunshine and flowers, make love not war. His Love Is The Law album is hippy Age of Aquarius claptrap from start to finish yet curiously engaging.

7. Morrissey – “I’ve Changed My Plea To Guilty” (1991)
When the Queen famously accused Morrissey of not being able to sing in 1986 he replied “that’s nothing, you should hear me play piano”. Unbelievers may scoff at the very thought, but here Moz – just backed with a piano – gives the vocal of his life.

8. The Pink Mountaintops – “The Gayest of Sunbeams” (2009)
When I was at school I was accused of making up bands. Whaddya mean you’ve never heard of the Direct Hits? This looks like I’ve made up the band and the song title.

10. The Electric Stars – “Between The Streets and The Stars” (2012)
How you view The Electric Stars will depend almost entirely on how you view the Brit-Pop era. “Between The Streets and The Stars” may have got lost in the scrum back then but now it's so out of step it almost sounds subversive. The chorus has most definitely infiltrated my brain.
Posted by Monkey at 11:08