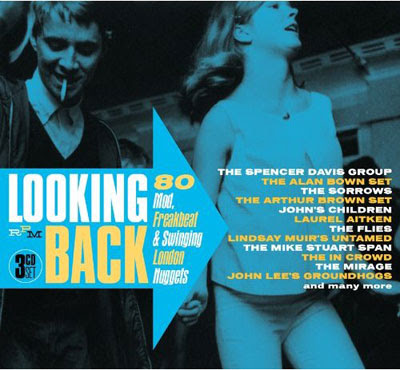 The title of this new 3 CD set does most the review but it’s worth adding a few words by way of a recommendation. It’s been a long time since I bought a compilation like this as I’d been under the somewhat arrogant misapprehension I’d discovered all the worthwhile British 60s Mod stuff. That alone – What is Mod stuff? – is a contentious subject and one the accompanying booklet addresses from the start. Here, “a Mod record might actually be any Sixties track with a swing in its step, a groove in its heart and an ability to make you want to dance.” The validity of that is open to debate but should any track not fall within your own modernist parameters, it’ll fall within the easier to interrupt Freakbeat tag or the catch-all Swinging London Nuggets.

But let’s not get bogged down in semantics, this is a fab collection. 80 songs is whooping amount to wade through but the quality tunes are thickly, not thinly, spread. After five complete plays there are only two or three that grate slightly but nothing that gets me dashing to the skip button. As established, there’s a blend of blue eyed club soul, aggressive proto-punk and a handful of tracks that defy easy categorisation. The familiar nestle comfortably with the less familiar and, in the case of The Knave’s suitably entitled Hammond workout “Ace of Clubs”, a handful of previously unreleased cuts which far exceed expectation. What was surprising though, was how fresh the “oldies” sound. By oldies I mean Mulberry Bush-era Spencer Davis Group, John’s Children, The Untamed, etc. The Syndicats “Crawdaddy Simone” sparkles with a clarity I’d not heard before. A far cry from its inclusion on compilations of dubious legality like the English Freakbeat series that sounded like it they were recorded on a cassette recorder from the room next door. That holds for many tracks here which uncover previously obscured layers of vivacity and imagination, not least on the Alan Bown Set’s “Jeu De Massacre” which is mind-boggling in its audacity.

As well as the tracks themselves (thoughtfully sequenced and brilliantly mastered) the booklet manages to avoid ham-fisted and tired Mod images and uses more inspiring period shots. A thoroughly refreshing package all round.

Looking Back is released by RPM/Cherry Red, priced in my local record emporium at £17.99, and includes The Renegades "Thirteen Women" as featured in the previous post.
Posted by Monkey at 18:38