THE BUDDHA BAR by JOSEPH RIDGWELL 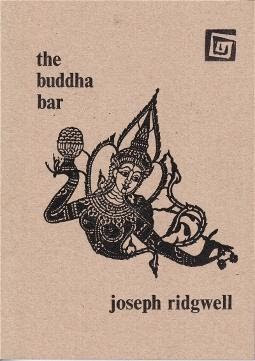 Regular readers will know I like Joe Ridgwell’s work. If I had a friend down the pub who wrote stories and poems, I’d like to think they’d be like Joe’s. This isn’t to say he writes like a gibbering lunatic, just that he writes like a perceptive mate with a bunch of escapades to tell rather than someone who wants to talk about literature all night; and who’d want to be stuck with them?

I finished The Buddha Bar a couple of weeks back but it was only yesterday when reading Jack Kerouac’s recently published The Sea Is My Brother that it properly fell into place. Joe hits the same theme in 2011 as Jack did in 1943. In Jack’s book Bill Everhart meets Wesley Martin on a drunken night out and the next day, on a complete whim, leaves his job as a college lecturer and hitchhikes to catch a ship and become a merchant seaman. “Look what twenty four hours and a moment of determination can do!” he exclaimed. “I think I realize now why the pioneer spirit always guided me in my thinking – it’s because he’s free, Wes, free!”

It’s that same restless spirit and search for freedom that dominates The Buddha Bar: the need to explore and to experience, even if those experiences aren’t always positive. Similar to his debut The Last Days of The Cross, we find a wandering Joe boozing, birding and becoming infatuated with the type of woman your mother maybe warned you about. When the opportunity of investing in a small bar in Thailand is put to him by some crazy local he has the hots for, and has just met, he doesn’t need much persuading in handing over the last of his money. “If you don’t take it you will regret it for the rest of your life. Fuck it, I thought,” and the dream of being a big shot bar owner puffing on a cigar takes shape. Things of course don’t work out the way of dreams, they never do, but there are funny times, sad times, scary times and dreary times, and once they’re gone, they’re gone. And from that, there's no escape.

The Buddha Bar by Joseph Ridgwell is published as a limited edition by Blackheath Books.
The Sea Is My Brother by Jack Kerouac is published by Penguin.
Posted by Monkey at 16:50