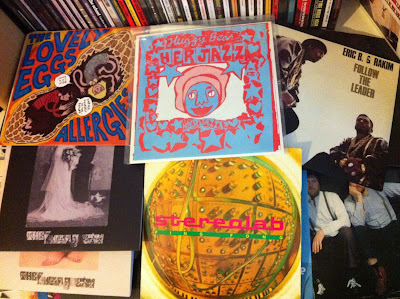 A few things that have been spinning in Monkey Mansions this past month.

1. Jackie Wilson and Count Basie – “My Girl” (1968)
These two cut an album, Manufacturers of Soul, and spruced up this old chestnut with a lovely new arrangement.

2. Dillard & Clark – “Why Not Your Baby” (1968)
I first heard this banjo bluegrass beauty by Velvet Crush and it took years to locate the original until it was added as a bonus track on the CD of The Fantastic Expedition of Dillard & Clark. A good album made great.

4. Chas & Dave – “The Sideboard Song” (1979)
I’ve been to many gigs and seen many things but nothing prepared me for being swept along on a sea of boozing cockneys last week as we engaged in a mightily exuberant Christmas knees-up. They played this twice. The second time I thought me old jam was about to pack in.

5. Pete Townshend – “Rough Boys” (1981)
This needs to be experienced with the promo video to reap the full sleazy, uncomfortable horror as Pete preys on hapless mods and rockers in a snooker hall, wanting to kiss, bite and get inside them. Not for the fair hearted. I’d love to know what Roger and John made of it.

6. Eric B. & Rakim – “Follow The Leader” (1988)
There was something about Rakim’s laid back jazzy delivery that set them apart from the 80s hip-hop herd, but I wasn’t expecting this to still sound so boxfresh (as Westwood might say).

7. Huggy Bear – “Her Jazz” (1993)
Time has done little to soothe the stomach-bending agony caused by this savage kick in the nuts. If you want to see how to play music live on the telly, watch their performance on The Word.

9. The Lucid Dream – “Love In My Veins” (2011)
A dark, brain rattling, psychedelic stomp that shivers your bones and rises to heat.

10. The Lovely Eggs - “Allergies” (2011)
All the usual offbeat Eggy goodness with the added ingredients of a super furry animal, a gorgeous handclapping break, and a magic swirling sitar finale from the band of 2011.