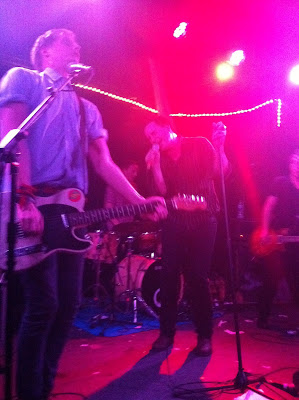 Art Brut are now four albums in and each time I see them it's in a smaller venue. At this rate I’ll have to move the settee so they can set up in my flat. It only takes Eddie Argos to midway through their second song to reflect on this. “Here we are, playing in the shadow of the Forum. Why aren’t we playing the Forum? When big bands play there they use this as their dressing room.” For those unfamiliar with London venues, the Forum holds about 2000 and the Bull and Gate about 150. In his words they’ve plateaued, adding they don’t do badly enough to stop altogether just not well enough to make any money. “Buy a t-shirt, a comic, anything. I’ve got no money”. When he does a clumsy version of his microphone wire skipping trick he notes “that would’ve been so much better if we were playing the Forum.” None of this is said with any bitterness just an acceptance that things don’t always work out the way you imagine. Even the star of Eddie’s “My Little Brother” is no longer 22 and out of control; he is now 29 and “he’s a teacher!”

If success could be achieved via the strength of live shows alone Art Brut should be bathing in asses’ milk and arriving at gigs by carriages pulled by the NME’s latest starlets. I couldn’t hand on heart recommend all their records but their shows are always nothing less than brilliant. Argos’s comedic monologues during songs are wonderful self-depreciating interludes and the way the others keep up with instant set-list changes in response to audience requests - or Eddie’s whimsy - shows what a tight unit they are. There are no I’ll-go-the-bar-whilst-they-do-this-boring-one moments as everything is kept in full punk racket mode. Personal favourites like the more ambitious “Mysterious Bruises” and “Sealand” never get an airing but that’s a minor issue when they slaughter the classic Brut templates “Formed a Band” and “Modern Art”.

Right, if you numbskulls aren't going to support this band, someone give me a hand with this settee.
Posted by Monkey at 10:19