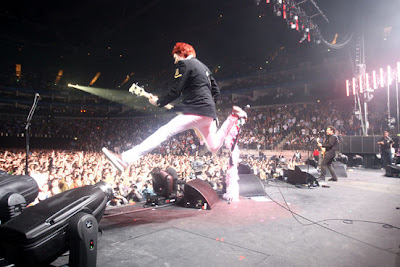 Two weeks ago I met Jeff Barrett, the head of Heavenly. I thanked him for signing the Manic Street Preachers and releasing my all-time favourite record “Motown Junk” back in January 1991. A chuffed Jeff shook my hand, we chatted and we spent five minutes enthusing about that record alone: from the opening Public Enemy sample of “revolution, revolution”, to the crunch of plugging in guitars, to the scattering of barely comprehensible slogans over an enraged punk racket, to the winding down outro of “we live in urban hell, we destroy rock ‘n’ roll”, it was – and remains – a defining statement. From that moment I was hooked and I’ve been hanging on their line for over 20 years.

Their gigs in 1991 were for me the best of their career and two in particular stand out. A show at the After Dark Club in Reading was especially thrilling. Playing to a small crowd who were hurling abuse and beer cans they revelled in the confrontation, taunting them further whilst ten of us skidded and slipped on the beer sodden floor as we thrashed around to “Sorrow 16”. They looked brilliant, sounded brilliant, were wonderfully provocative and mixed punk with beat writers and politics with glamour. Barrett said of that time, “They weren’t the best band since the Clash; they were the best band ever”. Their Christmas gig at the Diorama was mayhem. By then they’d amassed a devoted following who went crackers within the white walled arts venue. It’s amazing nobody was hurt in the frightening crush in front of the stage. In the clamour to touch or kiss them (straight men attempting to kiss straight men, the Manics did funny things to young lads) people were screaming in agony. My legs were pressed so hard against the low stage I thought they would break. At times it was impossible to move anything other than my head. Utter chaos but the best gig I’ve ever seen.

Twenty Christmases on from the Diorama there wasn’t much chance of injury sat half way back in the cavernous O2 Arena. The only danger was getting tomato ketchup squirted from someone’s hot dog on to the furry coat I’d borrowed from Mrs Monkey. They’re the only band I’d go to such a venue for, and only then because this was a unique event. It was billed very much as a line in the sand, an everything must go event. They’ve released National Treasures, the (not quite) Complete Singles collection and now as a one-off before disappearing for a few years to have a rethink and perhaps come back in a different form (James claims he’s sick of his own voice), they played all “38 of the fuckers” in non-chronological order. I guess a fair few turned up thinking it might be their farewell gig although at the end James said they’d hopefully see us in two years’ time. After all the build-up it seemed perhaps a lot of fuss had been made over nothing; a two year break isn’t uncommon for bands.

The songs obviously weren’t a surprise but James Dean Bradfield donning his Holy Bible sailor garb was; Nicky began by sporting his Generation Terrorists skinny white jeans and pumps before eventually settling on a dress and a Spillers’ record shop hoodie; Sean wore a black shirt, which was quite something for him. Richey loomed large from the video backdrop and looked like the most beautiful man to walk the earth. It was hard not to imagine what he would look like now but it was also difficult to envisage the Manics lasting this long with him there in person rather than as their spirit guide sat on their shoulder.

They played two 90 minute sets; 19 songs in each set. It might have been a test of endurance for the band who paced themselves accordingly (the big screen showed poor Sean puffing like a middle aged man running for the bus after the third song) but it whizzed by for me. By James’ admission before the last song, the 38 singles are a mixed bag, “some great, some not so good, but it was interesting.” He’s right and they mixed them well, during the first set getting rid of the weak “Let Robeson Sing” (sung by Gruff Rhys) yet following it with the Herculean “Faster”; the wishy-washy “Indian Summer” making way for the bold “Stay Beautiful” and so on, before ending with the magnificent “If You Tolerate This Then Your Children Will Be Next” – the great UK number one single.

The second set followed a similar pattern. I was disappointed when I saw them after the release of Lifeblood they didn’t play the funky synth oddball “The Love Of Richard Nixon” but now I hear why as it sits uncomfortably amongst the guitar based songs. If “Tolerate” was an unlikely number one it was nothing compared to the largely forgotten fury of “The Masses Against The Classes”. The record buying public of 2000, take a bow. “Found That Soul” got a lukewarm reception for the type of fizzing energy that harked back to earlier singles but “Revol”, never a band favourite, was as brutal as a song about “group sex in the Kremlin” deserves. If I had to pick one highlight it would be that, although “Roses in The Hospital” was a contender. Even “Some Kind Of Nothingness” sparkled like the giant glitter ball that accompanied it. Nicky was reportedly distraught when last year it became their first single since 1991 not to make the top 40. “Motown Junk” hadn’t lost any of its excitement although it has lost a few words as James refuses to complete the line “I laughed when Lennon got shot”. This irritated me for two reasons: it’s one of my favourite lyrics (although I’ve no knowledge of the context); and James is far too mature, decent, understanding and darn dignified to sing it anymore and I know, deep down, he’s right. The set closed with “A Design For Life” and Nicky half-heartedly and pointlessly breaking his bass in half.

Jeff Barrett thinks they will come back more experimental and maybe on a smaller label; he’d love to have them back on Heavenly. They’ve always been painstakingly protective over their legacy and careers but with the business of selling music unrecognisable from the one they starred in (I had to buy "Motown Junk" simply to hear it), it’s time to shuffle the pack. Without Nicky’s preoccupation with chart positions it might free them from their own history.

In the set of lyrics Richey left behind before his disapperance he wrote of drawing the perfect circle; on Saturday it felt as if the Manics closed one, perfect or otherwise.