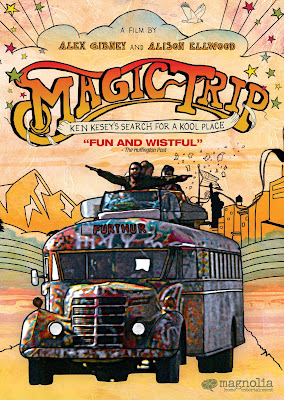 Too old to be beatniks and too young to be hippies, Ken Kesey and his Merry Band of Pranksters bridged the counterculture gap with their On The Road inspired, drug fuelled, 1964 journey across America in a psychedelic school bus.

Their notion was to film the trip from Kesey’s home in La Honda to New York and make a movie along the way. Parts of their adventure has already been cemented in the minds of every wannabe freak thanks to Tom Wolfe’s book The Electric Kool-Aid Acid Test but the film never materialised as the Pranksters spent over forty years trying to forge hundreds of hours of video and audio tape into some semblance of order. The idea it might have been easier to pass the footage to someone that knew what they are doing seems to have taken an awfully long time to dawn but recognised documentary makers Alex Gibney and Alison Ellwood have now completed the job, offering us a ride upon the bus. Destination: Further.

The film starts with a stiff History Channel style narration to introduce the swashbuckling Ken Kesey - the ventriloquist loving, football playing, medical drug experimenting, bestselling author of One Flew Over The Cuckoo’s Nest - and his chief cohorts before settling in to a more fluid journey. Thereon in the film uses the archival material (plus a couple of subtle re-enactments) along with commentary from the participants. The voiceovers are out of shot so you never get to see them in their grizzled old age, instead seemingly staying the age of the footage.

The events unravel like a hipster’s soap opera with relationships, drugs, freak-outs, mental institutions, mishaps, fun, happiness, sadness, acid tests, and the invention of tie-dye. Now, if one was going to carry a vast quantity of hallucinogenic drugs across the country they’d be advised to do it as inconspicuously as possible. Painting a bus in psychedelic colours; scrawling “Weird Load On Board” across the front licence plate; standing on the top of it banging instruments to the personal soundtrack inside fragile minds; stopping travel, wouldn’t be wise. The police regularly pull them over but this being 1964, and hippies and drug culture not yet headline news, the Pranksters gibber something about making a film, show their recording equipment as evidence, and go on their merry way leaving behind mildly amused law enforcement officers. LSD wasn't illegal but marijuana possession could result in a very lengthy stretch as Neal Cassady already knew only too well. It must’ve been a thrill to have the real life protagonist of On The Road behind the wheel but being a speed freak (of both kinds) he would’ve driven me mad with his endless incomprehensible babbling. When they get to New York they meet up with Jack Kerouac at a party who sits puffy faced and grouchy in his chair, disgusted by the uncouth shenanigans surrounding him.

I used to think it would’ve been brilliant to have been on the bus. Nowadays, being somewhat less adventurous, I’m not sure I could've handled it mentally (let alone glugging acid from a carton of a orange juice), so being able to hitch a lift for 103 minutes is the more palatable way to travel, even if it makes me squarer than I'd like to think.

Magic Trip: Ken Kesey’s Search For A Kool Place is released on DVD by StudioCanal.
Posted by Monkey at 16:48