MALICIOUS DAMAGE: THE LIFE AND CRIMES OF JOE ORTON AND KENNETH HALLIWELL IN ISLINGTON 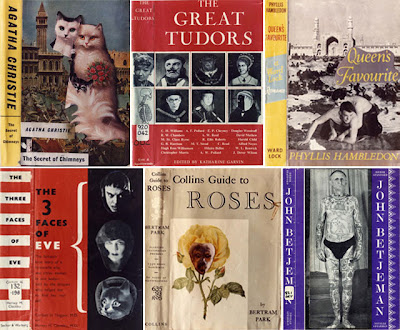 Last February I wrote (here) how budding writers Joe Orton and Kenneth Halliwell helped themselves to books from Islington libraries to create collages on book jackets before placing them back on the sleeves to watch the reaction of browsers. This protest over “rubbishy books” and an early version of guerrilla art, along with wallpapering their flat with torn out pages, earned them both a six month stretch in 1962. The following five years saw Orton’s star spectacularly rise as a successful and award winning playwright (Entertaining Mr Sloane ran on Broadway and Loot won the Evening Standard best play of ’67), Halliwell, previously Joe’s mentor, became marginalised and struggled with jealousy and depression, culminating in nine murderous hammer blows to Joe’s head and his own suicide in their tiny 2nd floor Noel Road flat. Orton was 34, Halliwell 41.

Islington Council were none too impressed by having their book stock “attacked by predators” 50 years ago but now they celebrate their former residents with an impressive exhibition within the borough’s museum. The main focus is on the books they altered. All forty of the surviving ones are displayed as framed works of art rather than the perceived acts of vandalism that resulted in an eighteen month investigation by the council’s legal clerk Sidney Porrett who is quoted as saying “I had to catch these two monkeys”. Monkey heads and cat heads were regular replacements on many books. Some aren’t especially interesting yet others show a mischievous camp humour: John Betjeman is replaced by a tattooed man; Queen’s Favourite is decorated by two topless men grappling on the floor; and best of all, The Steel Cocoon by Bentz Plagemann (which sounds like a name Joe and Kenneth would’ve created but is the genuine author) has a prominent well-filled jockstrap as the new design. There are copies of the original jackets but there’s no comparison really.

It’s wonderful to see the typewriter Joe bought in 1967 for the not inconsiderable sum of £80, and on which he wrote What The Butler Saw and the rejected Beatles screenplay Up Against It, but even that is upstaged by lists of ideas for prospective book and play titles and a volume of his infamous diary covering a holiday in Tangier. I first read his plays and diaries many years ago and being young and green was rather shocked to read such explicit accounts of promiscuity and gay sex. The page open here is typically frank account of a sexual encounter which Joe describes as “very goatish”, which is a new one on me but a phrase I’m looking forward to using at the earliest opportunity. Joe’s diary became a cause of added anguish for Kenneth during their final year until he, in the words of Orton’s brother, “went crackers”. His suicide note simply read: If you read his diary all will be explained. KH. P.S. Especially the latter part. 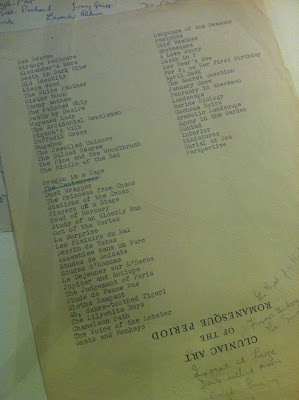 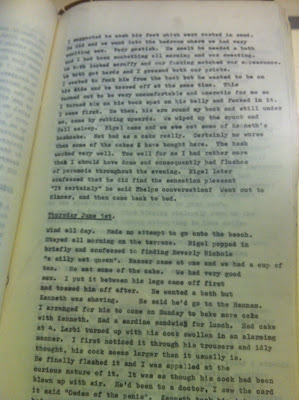