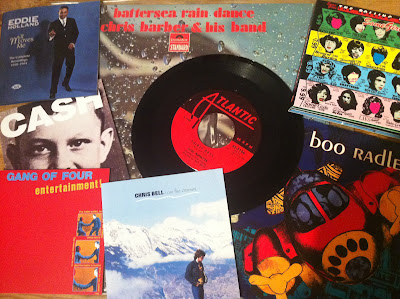 1. Bo Carter – “My Pencil Won’t Write No More” (1931)
A right old saucy one was Bo. He recorded 110 songs during the 1930s and from his lyrics I’m surprised he had the time. Some sample song titles: “Your Biscuits Are Big Enough For Me”, “Don’t Mess My Digger So Deep”, “Please Warm My Weiner”, “Mashing That Thing” and, my personal favourite, “Banana In Your Fruit Basket”. Little wonder he eventually ran low on lead.

2. Clyde McPhatter – “Thirty Days” (1957)
A year before he died, aged just 39, as a result of heavy drinking, a bitter McPhatter claimed he had no fans. Oh Clyde, you did and you do.

3. Eddie Holland – “True Love Will Go A Mighty Long Way” (1962)
Not an early Holland-Dozier-Holland cut but a Holland-Holland-Mickey Stevenson one before he fully hit his stride at Hitsville. Ace Records have beautifully put together a new Eddie Holland compilation It Moves Me: The Complete Recordings 1958-1964 of which this is a highlight.

4. The Ballroom – “Baby Please Don’t Go” (1967)
There are hundreds of versions of this blues chestnut but none as audacious as this mind blowing piece of pulsating West Coast psychedelia.

5. Chris Barber and His Band – “People Get Ready” (1969)
Giorgio Gomelsky at Marmalade/Polydor wouldn’t give The Action a recording deal yet whisked the considerable vocals talents of Reggie King away with the promise of production work. The pair and Chris Barber are credited as producers on Barber’s Battersea Rain Dance, an album of instrumentals bar this track with a pub style vocal. Reg presumably sat behind the mixing desk and pressed the record button. What a bloody waste.

7. The Rolling Stones – “No Spare Parts” (1978)
Mick and Keef probably thought “Faraway Eyes” was enough to fill their country quota on Some Girls so this has only seen light since the recent two-disc reissue. I can’t think of an instance when the Stones used a pedal steel without great results and this is no exception.

8. Gang of Four – “I Found That Essence Rare” (1979)
The liner notes of the CD include testimonies from Michael Stipe and that Flea fella from Red Hot Chilli Peppers. Don’t let that put you off.

9. The Boo Radleys – “Wish I Was Skinnny” (1993)
This still sounds good but, please lads, don’t take it as encouragement for you to get back together.

10. Johnny Cash – “For The Good Times” (2003)
A Kris Kristopherson song but like so many of his later recordings Cash convinced the listener it was his own and sung from profound personal experience. Breaks and warms ones heart in equal measure.
Posted by Monkey at 17:15