THE SOLARFLARES at the WATER RATS, LONDON 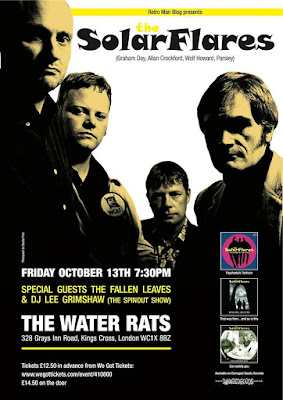 Before Noel Fielding bothered cakes for money he played Vince Noir, zookeeper and King of the Mods, in The Mighty Boosh. In the ‘Jungle’ episode Vince comes face to face with Rudi, a jazz fusion guitarist with the Bongo Brothers and High Priest of the Psychedelic Monks who, with a tiny guitar and door in his afro, says with the air of studied mysticism, “I go by many names. Some call me Shatoon, Bringer of Corn; others call me Mickey Nine, the Dream Weaver; some call me Photoshop; others call me Trinew, The Boiler…”. This scene goes on and on, you get the picture.

Some call Graham Day, Allan Crockford and Wolf Howard, the Prime Movers, Escapee Prisoners; others call them Graham Day and the Forefathers, Partytime Songbookers; this weekend, for the first time in well over a decade, they are the SolarFlares, the Great Returners.

With three of the five SolarFlares albums (four proper ones and an odds and sods comp) recently reissued on Damaged Goods they entered the Water Rats’ Zooniverse, incidentally the building that hosted the Prisoners – complete with Star Trek outfits – for Channel 4’s The Tube in 1984 which introduced them to so many.

Taking back to that stage on Friday, sporting the same hair style and similar guitar, Graham welcomed back Parsley, who joined the band after a couple of LPs, on Hammond adding “apart from that, it’ll be the same old shit” suggesting a more recent Forefathers set, drawing from their various incarnations, was in store but they stayed in character and stuck to the script, keeping to Flares songs.

They began with the opening track from their 1999 debut Psychedelic Tantrums, a tribute to Graham Day’s mum, ‘Mary’. “Mary, do you approve of the things you see? Mary, can you hear me?” I’ve no idea if the late Mrs Day was a fan of ballsy late 60s styled melodic rock but she probably could hear them and if looking down, at the first of two shows that sold out before even the posters had been designed, and heard the rapturous response to every track she would be a proud lady.

Both Graham and Allan have spoken fondly about the music they made as the SolarFlares. Graham being of the view he wrote some of his best songs then and, in his words, “learnt how to sing properly”. There was much rejoicing when, after the Prime Movers disbanded circa 1993 in a sea of prog-rock noodling and members embarked on separate projects, the SolarFlares appeared and focused on their strengths: snappy songs with rollicking elements traceable back to the Small Faces/Who/Kinks (okay, and sounding close to the Prisoners) and scattered them with groovy go-go instrumentals from would-be spy and sci-fi films.

Hearing a full set of those songs underlined those opinions, a fact overlooked by many at the time (including, I hold my hands up here, myself) whose interest in the band quickly dwindled after the initial excitement died away. It’s difficult to say why, maybe it was timing, (I was fixated on R&B during the early 00’s and wasn’t seeing bands) but there were rich pickings to be had to latecomers and diehard returnees alike.

‘Medway’, ‘Cant’ Get You Out of My Mind’, ‘Laughing Sun’, ‘Hold On’, all zipped by with considerable groove . I’m rubbish at remembering titles of instrumentals but pretty sure there were four including Parsley let loose on ‘Angel Interceptor’ and ‘Girl In A Briefcase’ plus the ‘Hush’-recalling ‘Moonshine of Your Love’. ‘Miles Away’ and 'It's Alright' from 2000's That Was Then... So Is This stood out as superb slices of catchy 60s pop and ‘Sucking Out My Insides’ as blood curdling as the title suggests.

Graham was concerned the supercharged, 100mph encore ‘Out of Our Minds’ would give them a heart attack but as Allan said, with the world reportedly due to end in two days, “we’ll give it a go”. They fortunately survived and egged on by promoter Steve Worrall of Retro Man Blog they came back to plunder Wimple Winch’s freakbeat classic ‘Save My Soul’.

There were a few quips about this show being the rehearsal for the Saturday night but, as magnificent as that would certainly be, it could surely only be equal – not greater – than this. The SolarFlares, they go by many names, on this form I call them Bloody Brilliant.
Posted by Monkey at 17:23