BLACK TEETH AND A BRILLIANT SMILE by ADELLE STRIPE (2017) 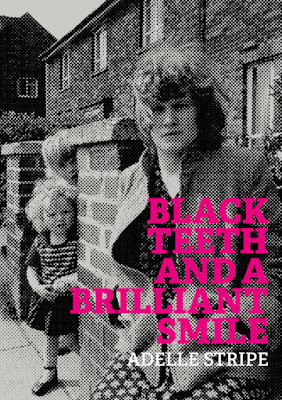 Andrea Dunbar is best known for writing Rita, Sue and Bob Too, a play depicting the relationship between an older man and his two babysitters, made into a film by Alan Clarke in 1987.

Andrea was far from the stereotypical playwright. Growing up on the notorious Buttershaw Estate – reputedly the toughest part of Bradford’s toughest area – Andrea’s exceptional writing talent, particularly for dialogue, brought her to the attention of Max Stafford-Clark, who put her first play – The Arbor, written in green biro at the age of 15 – on at the Royal Court theatre in London’s West End. After three plays, all drawn from lives around her estate, Andrea died in 1990, aged 29, from a brain haemorrhage in her local pub.

Andrea’s story is now the inspiration for Adelle Stripe’s debut novel, Black Teeth and a Brilliant Smile. The introduction insists it’s a work of fiction – populated by real and imagined characters – but this exceptional book is clearly biographical, the main events undoubtedly true.

It’s a tale of contrasts: acts of brutality and occasional kindness, of rich and poor, belief and doubt, north and south, even stage and screen. That Andrea’s life story – punctuated by sex, domestic violence and alcoholism – mirrors her work is no surprise but she deals with even the worst events with stoicism. There are though, fear not, moments of humour - both in Dunbar and Stripe's telling.

Although dimly aware of the film adaptation, and the furore that surrounded it, Andrea Dunbar’s name meant nothing to me. I’ve not seen the plays, read them or watched the film. I bought Black Teeth and a Brilliant Smile because I’ve always enjoyed Adelle Stripe’s writing and poetry for the independent press and trust her judgement. Such faith did not go unrewarded. Not only is this Adelle’s best work to date - it’s a tremendous stand-alone “piece of kitchen sink noir” – it also serves as a very welcome introduction to the life and work of Andrea Dunbar.

Black Teeth and a Brilliant Smile by Adelle Stripe is published by Wrecking Ball Press.
Posted by Monkey at 20:54