THE LIMINANAS at OSLO, HACKNEY 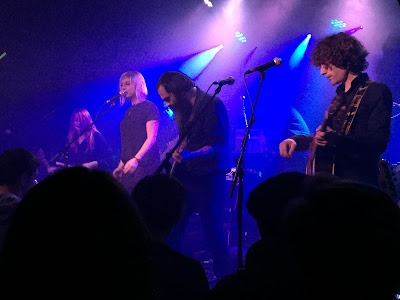 A little over a week ago, I’d never heard of The Limiṅanas, now they’re my favourite new band. Only they aren’t new, having been around since 2009 and with a handful of albums under their belt, I’m just slow off the mark.

After being tipped-off they were playing their first ever London show, which would be “one of the gigs of the year”, a crash course ensued. What revealed itself was The Limiṅanas, from Perpignan, are French couple, Lionel and Marie Limiṅana, who I’m told rarely play outside France/north-east Spain. Marie sings and drums, Lionel sings and plays the other stuff. They don’t fit in one tidy box: they can caress with dreamy pop, the vocals can be his or hers, sung in whispered French or English, they can hit the fuzz, they can take you down the Velvet Underground Says route, whip ya with the Mary Chain, invoke spaghetti westerns, spy movies, La Nouvelle Vague, sitar stylings and, by French law, the smoke of Serge and Jane frequently wafts across the senses. Anton Newcombe of Brian Jonestown Massacre provides guest vocals on rattling new single, ‘Istanbul Is Sleepy’, and Peter Hook lent a very Peter Hook bassline to last year’s ‘Garden of Love’ on their Malamore LP.

The thought of watching yet another guitar/drums duo didn’t appeal yet I didn’t know how they’d transfer to a live setting; whether they’d use backing tapes or be accompanied on the extra instrumentation that give their records the extra, sometimes exotic, flavour.

What appeared on stage on Thursday night was seven-piece band - four at the front, three at the back – who for 75 minutes rocked the living daylights out of a corner of Hackney. Neither Lionel or Marie sang; those duties were handled by a tambourine punishing Monica Vitti lookalike and a curly haired bloke on guitar. Big hipster-bearded Lionel led with his guitar scrunching, propelling songs until a climax when he’d shoot a look to Marie who’d cease proceedings with a sharp emergency break. Marie, positioned stage-left, was the heartbeat. Playing a small drum kit –bass, snare and tom, no cymbals or hi-hat – she struck, with Moe Tucker simplicity, a thumping beat, so effective it made other drummers look silly with all that fancy darting around their kits, crashing cymbals and playing elaborate fills.

The sheer power was astonishing, especially as their records can sound sparse and airy. Tough guy opener ‘Malamore’ - “I’m Robert Mitchum, I’m Bob Duvall” – stomped hard as they asserted “Sit yourself down, and shut your mouth”. ‘Down Underground’ followed (which would’ve fitted nicely on the last Primitives LP) and destroyed the recorded version. Even lighter songs ‘El Beach’ and ‘Garden of Love’ were electrifying.

The further down the line it got the more I was sucked into a hypnotic, wah-wah pedalling, head spinning, metronomic trance; the heel on my right boot worn down to the leather as it hit the floor BANG-BANG-BANG.

Beyond Lionel’s occasional ‘thank you’, they didn’t say anything; they didn’t need to. It was one of the gigs of the year as I’d been promised.

With thanks to man in the know, Grover. 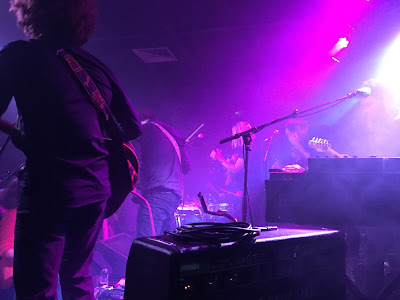