SOUL OF A NATION: ART IN THE AGE OF BLACK POWER at the TATE MODERN

A major exhibition at the Tate Modern in London, Soul of a Nation: Art in the Age of Black Power, closed last week. Looking at the two decades from 1963 it explored how black artists responded to and reflected the civil rights struggle, the Black Power movement and political and cultural changes in America. It was a soul stirring collection from both an aesthetic angle of the art displayed and the background to the work and artists which invited further investigation. Photography was tolerated in the gallery so I took a few pictures and spent several days afterwards digging around. 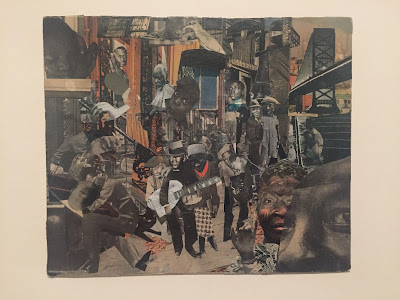 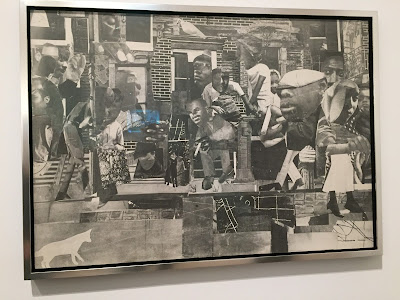 Romare Bearden - The Street and The Dove (both 1964)
The opening exhibits in Soul of a Nation were from 1963 - the year of the March on Washington and Martin Luther King Jr.’s I Have A Dream speech – and focussed on Spiral, a group of artists in New York looking to produce work within the wider context of the Civil Rights Movement. One of the founders, Romare Bearden, born in 1911 and an experienced artist, writer, poet, musician and social worker, suggested the group produce collaborative collages. The idea was rejected but Bearden went ahead and produced a series alone. As a lover of collage, particularly photo-montage, the exhibition couldn’t have got off to a better start for me than with a half a dozen of Bearden’s pieces including the bustling Harlem scenes portrayed The Street and The Dove. 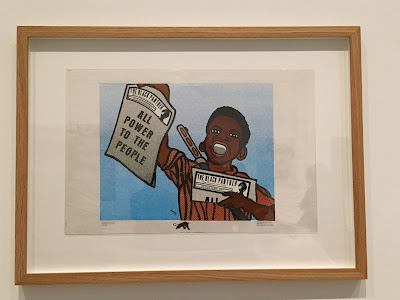 Emory Douglas – All Power To The People (1969)
As Minister of Culture for the Black Panther Party, Emory Douglas helped design the party’s newspaper and provided a series of posters for the back page as an effective way of distilling and taking concerns of the party to the streets. Douglas’s comic book style was as instantly recognisable as the Panthers themselves who knew a thing or two about image and branding. “Revolutionary art, like the Party, is for the whole community and deals with all its problems. It gives the people the correct picture of our struggle whereas the revolutionary ideology gives the people the correct political understanding of our struggle,” wrote Douglas. There were far more striking examples of Douglas’s work – lot of firearms and Pigs - displayed but such was the scrum of people around them this was the only snap I took. For more, see Black Panther: The Revolutionary Art of Emory Douglas, published in 2007. 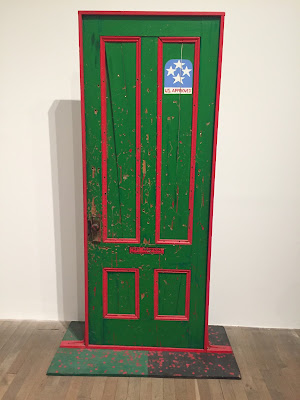 Dana C. Chandler – Fred Hampton’s Door 2 (1975)
Within a year of joining the Black Panthers in Chicago, Fred Hampton rose to the rank of national deputy chairman and was instrumental in creating the Rainbow Coalition, working with local gangs of various ethnicities to reduce crime and violence which Hampton saw as self-defeating and detrimental to the plight of all the poor and oppressed people. Hampton’s influence both inside and outside the black community made him especially dangerous in the eyes of the FBI.

In 1967 Hampton allegedly assisted a group of schoolkids to help themselves to $71 dollars’ worth of tasty treats from a Good Humor ice cream van while he restrained the driver. The judge didn’t see the funny side and sentenced Hampton to a brain freezing two to five years. On bail, in December 1969, at home sleeping, Hampton was killed/murdered/executed by the Chicago police who fired nearly a hundred shots threw his door and throughout the flat – without return - in the raid, including two straight to the head from point blank range. 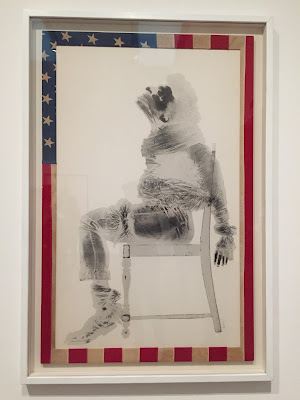 David Hammons – Injustice Case (1970)
Bobby Seale, co-founder the Black Panther Party, and was one of the “Chicago Eight” arrested and charged with conspiracy and inciting a riot during protests at 1968 Chicago Democratic Nominating Convention. The only black man on trial – the rest were white activists, anti-Vietnam protesters and Yippies including Abbie Hoffman and Jerry Rubin – Seale’s request the trial be postponed as his lawyer was undergoing gall bladder surgery was refused, as was Seale’s subsequent request to represent himself. Throughout the early weeks of the trial Seale repeatedly interrupted the court to express his constitutional rights were being denied. Judge Julius H. Hoffman ordered court marshals to chain Seale to a chair with a gag in his mouth and tie his jaw shut with a strip of cloth wrapped from the bottom of his chin to the top of his head. This continued for several days until Hoffman found Seale guilty of 16 acts of contempt of court and sentenced him to four years in prison. The 1987 television film Conspiracy: The Trial of the Chicago 8 is excellent and well watching.

Hammons’ piece looks like an x-ray but was made by rubbing himself in margarine then pressing his body against the paper before sprinkling black powder on the grease to reveal the image. The American flag has been cut away and a man is boxed in, bound and gagged. As for Bobby Seale, in 1970 he published Seize the Time: The Story of the Black Panther Party and Huey P. Newton and in 1987 wrote Barbeque'n with Bobby Seale: Hickory & Mesquite Recipes. “I've developed my own contemporary southern-style, hickory-smoked barbeque recipes that have delighted the taste buds and appetites of politicians, writers, community activists, movie stars, family and friends, and thousands more at numerous barbeque fund-raisers.” 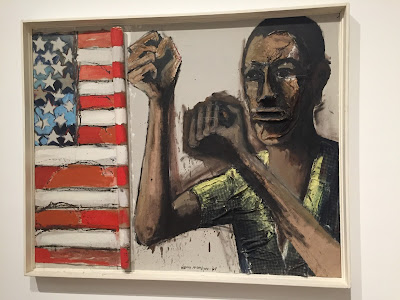 Benny Andrews – Did the Bear Sit Under the Tree? (1969)
Using the ‘rough collage’ style Andrews favoured, this is an oil on canvas painting given an extra dimension by the rolled-up fabric stars and stripes and the man’s mouth made from a zipper (unzipped). The man is waving his fists but doesn’t look threatening or angry to me; more scared and weakly defensive. Andrews explained he is “shaking his fist at the very thing that is supposed to be protecting him and that he’s operating under.” 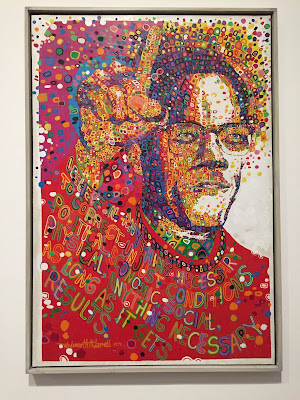 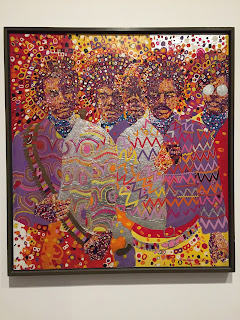 Wadsworth Jarrell – Black Prince (1971) and Liberation Soldiers (1972)
AfriCOBRA – African Commune of Bad Relevant Artists – were a Chicago artists’ collective and these paintings were made for their exhibitions. AfriCOBRA’s images would, according to their manifesto, embody “the expressive awesomeness that one experiences in African art and life in the U.S.A” and have an emphasis on “Color color Color color that shines, that is free or rules and regulations”. The bright Kool Aid acid colours used here would make eye-catching posters.

Malcolm X in The Prince is largely depicted using the letter B for Black, Bad and Beautiful and if you look closely at Liberation Soldiers, the figure of Huey Newton on the left has ‘Badest Mothefucker Alive’ coming straight out his head. Stick that on yer wall.

A double-album, Soul of a Nation: Afro-Centric Visions in the Age of Black Power, featuring Gil Scott-Heron, Joe Henderson, Roy Ayers, Doug Carn and many more is available on Soul Jazz and a book of the exhibition is published by Tate. Both highly recommended.
Posted by Monkey at 11:22