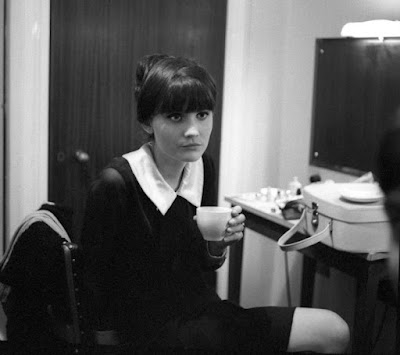 1.  Sandie Shaw – ‘Stop Feeling Sorry For Yourself’ (1965)
Adam Faith did an everything-but-the-kitchen-sink version of this Chris Andrews song but Sandie’s is stripped back (although still elegantly arranged) allowing her vocal to confidently command centre stage.

4.  Shirley Scott & the Soul Saxes – ‘You’ (1969)
Ms Scott cranked up her organ and was joined by three gentlemen – King Curtis, Hank Crawford and David ‘Fathead’ Newman – blowing their things for an album on Atlantic of soul/pop material. It’s all uptight and outta sight as you might imagine but this Marvin Gaye number is dancefloor dynamite.

5.  Joe Chambers – ‘The Alomoravid’ (1974)
From a super new Ace/BGP compilation Celestial Blues: Cosmic, Political and Spiritual Jazz 1970 to 1974. Chambers made his name at Blue Note during the mid-60s but had to wait until ’74 to cut an album as leader. ‘The Alomoravid’ was the title track with him up front leading, what sounds like, a small army of percussionists including David Friedman on marimba.

6.  Weldon Irvine – ‘Gospel Feeling’ (1976)
Funky, churchy jazz with more than a hint of The Generation Game. Maybe there’s a new genre for enterprising reissue labels to market: Gameshow Jazz. Didn’t they do well?

7.  Roky Erickson – ‘Crazy Crazy Mama’ (1986)
Head down, no nonsense, rockaboogie with Roky in tremendous voice. From the Don’t Slander Me LP.

9.  The Embrooks – ‘Nightmare’/’Helen’ (2016)
Despite a couple of weeks of deliberation and repeated plays I still can’t quite decide which of these two songs I like best. Luckily for us the reconvened Embrooks have put them either side of their new 7-inch waxing. The sawing, chugging freakbeat of ‘Nightmare’ sends sparks flying and buildings tumbling while the springy pop-psych ‘Helen’ do-do-doos in joy like the climax of a Euro-Mod weekender. Were the Embrooks this good the first time around?

10.  The Missing Souls – ‘Sweet, Sweet Sadie’ (2016)
Don’t know anything about these cavemen other than, like the Embrooks, this is also on State Records and they can only give us everything: lead riff fuzzed to eleven; organ swirling in its own stroppy stew; lyrics rhyming Sadie, maybe, crazy, lady; hey-hey-hey backing vocals; chomping break; and all wrapped up in two minutes. Exhilarating and a garage-punk masterclass to boot.
Posted by Monkey at 10:39