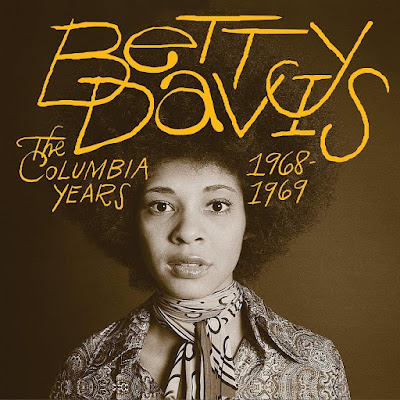 In Miles Davis’s autobiography, Miles, he calls ex-wife, Betty (Davis nee Mabry) ‘a talented motherfucker’; it’s the highest form of accolade given by a man not known to freely dish out the superlatives.

In May 1969, approximately halfway through their year-long marriage, with a band assembled by Miles featuring Mitch Mitchell, Harvey Brooks, Billy Cox, Herbie Hancock, Wayne Shorter, Larry Young and John McLaughlin, Betty Davis recorded a session for Columbia Records in New York with producer Teo Macero. Unheard since, not even known to bootleggers, The Columbia Years finally reveals not only the roots of Betty’s raunchy funk - she’d wait another four years to unleash the first of her four super-funky albums – but also Miles tentatively exploring the jazz-fusion groove that he’d begun with In a Silent Way and would soon manifest in Bitches Brew.

A couple of points to note. Most importantly, this was not, as it could appear, a husband using his influence and clout with his record company to cut a deal for a wife of limited abilities. Betty had already cut a few singles and seen her songs used by others. She had (motherfucking) talent, looks, attitude, knew her own mind and was also the one who, still in her early 20s, hipped Miles (by then, virtually ancient, in his 40s) to the psychedelic rock stew of Jimi Hendrix, Sly Stone and James Brown’s latest bag and kitted him out in the latest with-it clobber. The second point is if you consider Bitches Brew an instrument of torture, don’t let that put you off here as the results are far more accessible.

Why Columbia passed on the result is a mystery on this evidence. The playing – jazzy R&B with a funk twist – cooks and Betty’s vocals are sassy as hell yet less abrasive than they’d become. Cream and Creedence Clearwater Revival are covered by ‘Politician Man’ and ‘Born of the Bayou’ respectively but mostly Betty brings her originals to an exuberant party and the snatches of conversation between Betty and Miles demonstrate they both brought ideas into a shared creative process. These were only demos, and only enough for one side of an album, but it’s abundantly clear how much fun everyone had in the studio. Miles at one point asking, “What’s Jimi Hendrix drummer’s name? The one they call Mitch…” before falling into a fit of wheezing cackling laughter.

Three 1968 Hugh Masekela backed numbers, including a footstomping ‘My Soul Is Tired’, round things off in a more traditional full 60s soul style. As always with Light In The Attic releases it’s well packaged with interviews and commentary in the accompanying booklet. Stripped of historical interest this is an engaging half hour; with it, utterly compelling.

The Columbia Years is released by Light In The Attic Records on LP and CD.
An edited version of his review appears in the current issue of Shindig! magazine.
Posted by Monkey at 21:25