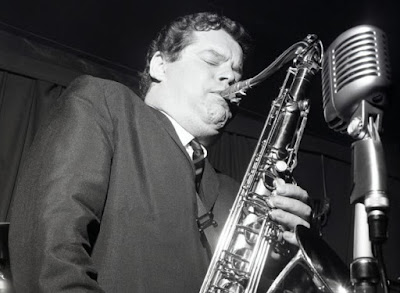 In the late 1950s, with Ronnie Scott, Londoner Tubby Hayes led the Jazz Couriers, exciting new British proponents of modern jazz who made their debut at the opening of the Flamingo Club; in the early 60s he was a household name, a regular on television, had his own series, made numerous film appearances, and was untouchable in the music press annual jazz polls. By 1973, drink and drugs and a dodgy ticker had seen him off, dead at the age of 38.

Mark Baxter and Lee Cogswell’s new hour-long film, A Man In A Hurry, tells the story of the short life a man who “burned the candle at both ends… then started on the middle”. More than that, the documentary seeks to place Hayes alongside the greats of jazz – Charlie Parker, Dizzy Gillespie, Miles Davis and company.

Edward Brian “Tubby” Hayes was prodigiously talented, receiving his first tenor sax at 12 years old, he formed his first band at 14 and was a professional jazz musician at 15; his headmaster making an exception to the school’s dress code by allowing him to wear a “Boston haircut”, something of a requirement to conduct his night time trade. He mastered the tenor, flute (allegedly playing it at gigs days after first picking it up) and vibraphone and took his talent to America to prove his worth amongst the “big boys”.

British jazz then, as now, was often derided as the parochial poor relation to the America version. To quote Benny Green’s liner notes from the 1961 Tubbs, “Its only conceivable handicap from a sales point of view that I can think of is the fact it was recorded within hailing distance of Marble Arch”. Such a snobbish attitude did a disservice to Hayes who, we hear, was at least anyone’s equal, irrespective of nationality or location.

Martin Freeman provides the narration and contributing talking heads describe Tubby’s life in a simple yet snappy and engaging way, intercut with snippets of music and archive footage. The film is made in such a way, and Tubby's life was interesting enough, that even if one doesn't care much for jazz, it's an engrossing story. The most enlightening contributions come from Hayes biographer and saxophonist Simon Spillett and people (including his son) who knew and witnessed Tubby in action. Poet Michael Horowitz speaks, as one would expect, with wonderful eruditeness.

DJ Patrick Forge recounts how he first heard Tubby on the Jazz Club series of LPs in the mid-80s, on the track “A Pint Of Bitter”, and how the title reinforced, in his mind, the unfortunate perception of British jazz being the preserve of middle-aged men with beards dressed in corduroy drinking real ale out of pint jugs (hang on a mo, that’s me now, shit, what happened?) rather than the sharp dressed hipsters depicted on Blue Note sleeves. “A Pint Of Bitter” by Tubby Hayes; just doesn’t sound cool does it? Perhaps to counter this, broadcaster Robert Elms and Acid Jazz’s Eddie Piller attempt to place Hayes in a “Mod” context. I’m not entirely convinced this section was necessary - is it not enough for Tubby to be the greatest jazz musician this country has produced but has to be a founding Modfather as well? – but knowing the Mod background of the film makers and many contributors it’s understandable.


I’ve bought a few Tubby Hayes LPs over the years (and have had a lifetime of Monkey Snr speaking of him with deep reverence) but two viewings of A Man In Hurry has given me a greater appreciation of the man and a determination to hear more of his music. What more could one ask of a film?

For more info see Tubby Hayes: A Man In A Hurry.
Posted by Monkey at 16:21