THE STAIRS at the KAZIMIER, LIVERPOOL 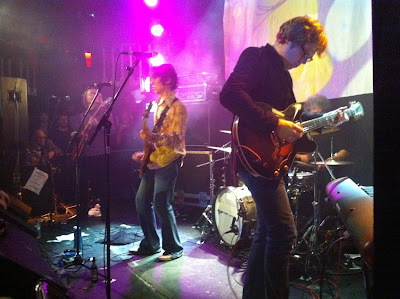 After months of eager anticipation The Stairs were back on Thursday night for their first gig in over twenty years. It was, without a shadow of doubt, a brilliant night. Nearly 500 people from all over the country squashed into a sold out Kazimier club in Liverpool, a stone’s throw from where Edgar Jones, Ged Lynn and Paul Maguire established The Stairs at the beginning of the 1990s.

Reformations can be dicey affairs with bands returning without original members, their motives questionable, looking a bit old and shit, and removed from their original period can appear out of date and, at worst, even cabaret. Certain bands are defined by their era and sit uncomfortably once extracted but The Stairs were always out of time; harking back to the 60s beat boom when the prevailing musical trends were an assortment of post-baggy, grunge and shoegazing. The Stairs weren’t the only ones going back to mono and recycling British R&B, US garage and Dutch Nederbeat but they were by far the best: more gifted, confident and charismatic than the rest and possessed an off-kilter humour. Who else concluded songs by asking “What do you think of Tarzan undies? Do they scare ya?”

From the opening seconds of ‘Mary Joanna’ - Ged’s opening riff, Paul’s thumping drums and Edgar’s thunderous bass and exaggerated Jagger howl – it was immediately apparent this was going to be good. When that was followed by ‘Flying Machine’, from their first EP, my excitement built incrementally with each passing song. The last times I saw the band, ’93-’94, they’d progressed into a heavier psychedelic rock band than beat combo, and whilst still excellent hearing sets of unfamiliar, experimental material was a different experience to two years previously. They’d moved on. I vividly recall The Stairs play a Mod Rally at the Isle of Wight in 1993 and the stunned reaction of the assembled Mods who didn’t know what to make of it all. Well, they did, but frankly that was their loss.

From ‘Flying Machine’, a perfect set unravelled, nineteen songs whooshed past. The majority of the classic (and it is that) Mexican R’n’B including ‘My Window Pane’, ‘Mundane Mundae’, ‘Sweet Thing’, ‘Woman Gone and Say Goodbye’, ‘Out In The Country’ all sounded box fresh, as did the double-whammy of ‘Fall Down The Rain’ and ‘Right In The Back Of Your Mind’ which nearly reduced the Kazimier to rubble ahead of its forthcoming demolition by developers. There were some choice EP tracks, ‘When It All Goes Wrong’, ‘You Don’t Love Me’ and ‘Russian Spy and I’; a couple of the later songs in ‘Skin Up’ and ‘Stop Messin’’; the nutjob “new” found-under-bed single ‘Shit Town’ sung by Ged; and even a brand new number ‘1000 Miles Away’ thrown in for good measure.

Everything was delivered with supercharged power, as if The Stairs had spent twenty years with all this energy suppressed, waiting to explode. The longer they played, the more they locked into each other. If all that wasn’t impressive enough what was bewildering was how the band had remained cryogenically frozen. Edgar looked like he’d walked straight off his record sleeves without a hair out of place and it took me a while to work out he wasn’t wearing the same pink and white paisley shirt from the Bass Clef in ’94 (that had a penny collar, this one pointed…); Ged has kept the same cut-by-himself-in-the-mirror curtains/bob affair and those bug eyes still bulge and his mouth still falls open as he plays guitar; it’s only a few flicks of grey in Paul’s still curly bonce that give any indication we’re now in a different millennium. Like I said, and call me shallow if you will, this stuff is important in bands. Imagine, if you dare, the horror of witnessing a bald Birdland or a fat Five Thirty. They were accompanied on acoustic/electric guitar and organ by Austin Murphy from Edgar’s band The Jones. For what it’s worth, he looked like a young David Hepworth.

There was little chat between songs, certainly no emotional milking of the situation: the music, the audience’s dolally reception, and the smiles of the band said it all. After a pounding ‘Skin Up’ they went off to quickly do that (possibly) before returning for the anthemic  ‘Weed Bus’, given a bizarre cowboy style intro by Edgar about the joys of Liverpool’s public transportation system. With that fantastic finale about knowing you’re in heaven, they were gone.

Apart from missing their old talisman Jason shaking his maracas one more time this gig had it all; any misgivings about spoiling their memory banished. Where The Stairs go from here remains to be seen – and I doubt they’ll want to keep treading old ground for long - but this night, this monumental night, this little piece of history, was nothing short of triumphant and, if anything, elevated their already treasured status for anyone fortunate enough to have witnessed it. 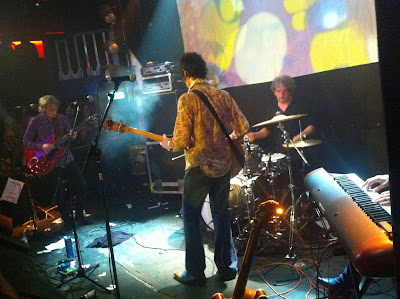