GET YER SKINS TOGETHER, THE STAIRS ARE BACK ON THE BUS!

The Stairs are back. On 26 November, over twenty years since their last performance, Edgar Jones (then Summertyme), Ged Lynn and Paul Maguire play a hometown reunion gig at the Kazimier in Liverpool. For a brief moment in the early 90s it appeared their big boss beat might crossover into the mainstream and whilst debut single ‘Weed Bus’ became something of a classic and their LP Mexican R’n’B sounds as good today as it did then, they fizzled out of the public eye after label Go Discs short-sightedly released them.

In early 1994 I interviewed Edgar for issue three of my fanzine, Something Has Hit Me, and it caught them at an experimental and ambitious time, excited by the possibilities of where their music could take them and what they could achieve. Unfortunately, they didn’t release another record during their lifetime and folded not long after. A second album Who Is This Is, which featured much of the material Edgar mentioned and was part of their live set at that time, quietly sneaked out on Viper many years after their demise. The same label this month releases a new odds and sods compilation, The Great Lemonade Machine In The Sky, including demos, live songs and alternative versions. Also, a limited edition 45, the Beefheartesque bonkers 'Shit Town' is pulled from the album.

With drummer Paul now based in Iceland don’t expect The Stairs to return full time so any chance you get to see them, grab it. In the meantime, let’s go back to ’94, that fanzine article and enjoy a few previously unseen photos… 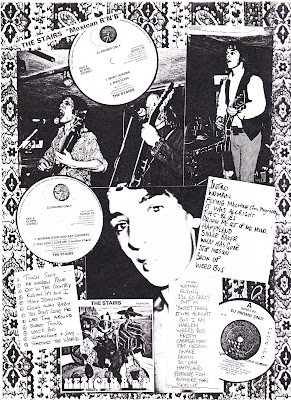 Something Has Hit Me: In 1991/1992, The Stairs released four great EPs and an outstanding LP, Mexican R’n’B. Everything they did was geared to being as authentically 60s sounding as possible, right down to having Go Discs release their records in mono only. Their sound was an accurate blend of Pretty Things, Chocolate Watchband and early Stones, anything modern was frowned upon Hand in hand with this was their well-documented love and use of dope, with two of their singles, ‘Weed Bus’ and ‘Mary Joanna’, being less than subtle in sentiment. Even their t-shirts bore the legend “Superstars of Smoking”.

The last eighteen or so months have seen an almost complete silence from the band, only popping up occasionally for the odd low key gig. Now in 1994, they’ve started to gig more regularly again. Something Has Hit Me talked to singer and chief songwriter, Edgar Summertyme.

You did a live session for GLR (Greater London Radio) this morning. How was it?
It was sound. Boss like. A good buzz getting up early in the morning and going down and playing. It was a good room to play in, as it was the first time I’ve heard everyone in the band properly for ages. We did two new songs that went out live, ‘Skin Up For Me Baby’ and ‘It Was Alright’. We’re trying out a few different bags at the moment. Like the way we’re playing and getting into different things. One of those songs is quite heavy and the other is more Tamla. We’re just trying to see what fits best, cos since we’ve left Go Discs we’ve become a different band really.

So you’ve left Go Discs then? Is that why you’ve been so quiet?
Yeah, that’s right. The fella that signed us left the company and then we had a big patch with no money coming in and that.

Have you gone anywhere and signed with someone else?
We’re not gone anywhere, we’ve looking at the moment. Tonight’s our first sort of showcase (at the Bass Clef in Hoxton). We’ve still got the publishing deal with Warner Chappell though, that’s important. They even had ‘Russian Spy and I’. They actually own that song but had to phone Holland and go through all their old records to check they owned it.

I thought the promotion you got from Go Discs was quite good.
Yeah it was quite reasonable like. They put us about a bit and all that. But the head man there now just isn’t into our bag. He’s just into pop records. We were getting harder and heavier and generally better and better at playing, but he isn’t a man that listens to the rhythm section or a record, he just listens for the twee lead singer. He likes twee lead singers and I could never sing like that.

You said about getting into different things, I saw you’re at the Isle of Wight last August (1993) and your sound was quite different, heavier in places and it seemed some was improvised.
Yeah, it was the San Franciscan thing really, that we got into. We’re trying to take that sound and modernize it. The thing is today, there’s a lot of good bands around but they’re not playing with real good taste. But I think that you can do something with modern music and make it tasty. I mean, there’s the occasional moments of Lenny Kravitz that are alright, you know what I mean, but he hasn’t the je ne sais quoi to quite pull it off. People will just have to wait for us. We just want to see a British band that’s as good as say the Red Hot Chilli Peppers and things like that. They’re quite good but they’ve got such a shit singer. 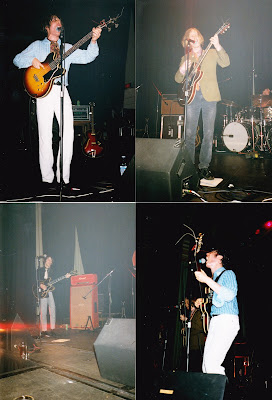 So it’s not just a case of recreating that 60s sounds anymore?
No, we want to take it further now. Because as musicians we’d just die, we’d be cabaret and that’s not a good place to be. I’ve got all the respect in the world for bands like The Aardvarks and that, who are carrying on doing that, bit I just don’t think it’s for us to carry on in that vein forever. Although, having said that, I’m looking back a bit further as well as looking forward. Listening to Sun Ra, Ornette Coleman, there’s more of that to be learnt. Captain Beefheart-isms. There’s a lot of ways to go. You don’t have to be Led Zep to take your music into the future. Things like Little Richard. There’s a lot to Little Richard than you realise because of all those 70s bands doing versions of his songs. But if you listen they sound like a lot of those early Stax records from the late 50s, if you listen closely.

Do you listen to a lot of soul music?
Yeah, you can learn a lot from that. The way the bands played together. The way they make room for someone to do something. I’ve learnt so much from that. I’ve always liked Motown and stuff but recently I’ve been playing Willie Mitchell, Garland Green, Jimmy McGriff and early James Brown instrumentals, things like that.

Have you recorded any new material?
We’re recorded a few demos and that but we’re looking to record some more when we get the money. We’ve got so much material to get through. We’re about a year behind my writing now, so we’ve got a lot of catching up to do.

Will those songs just get left behind?
Yeah a lot of it will but songs go through rebirths. Sometime they go through very big changes. If I decide I don’t like the arrangement or something I’ll do a “tribute” arrangement. Like on ‘No One Knows’, I hated the arrangement so we did a bit of an Easybeats tribute, 1966 style. So, you’ve always got all that to choose from. Having said what I did earlier, we’ll always bring up things from the past, but we’ll try to present them with the modern person in mind, because we want to reach as vast an audience as possible. If anything, we’d like to teach them and then give them weirdness. Get ‘em into that. Plus it would be good for the other bands as well because no one is reaching across that barrier at the moment. We want to break down that barrier.

You recorded an album of cover versions that didn’t come out, how come?
The label, Imaginary, folded. So we were unable to release it. One of the tracks that might have ended up on it was featured on a compilation. We did ‘Moonchild’ by Beefheart. It was a pretty spot on copy. It’s on 1965 Through The Looking Glass but I haven’t got a copy of it myself yet.

What about putting something out yourself?
Yeah, we’re thinking of doing a single ourselves. We’re trying out a few new ways of recording. I can’t really go into it cos someone might rob the idea but basically it’s a way of getting a modern sound that sounds like an old sound that sounds like a modern sound. Also, there’s a lot more range to this band that you don’t know about. Left Banke kinda stuff that you’ll never hear live, but they will eventually come out on albums. I love that big production stuff.

Brian Wilson?
Yeah, I was a big Smile freak for about two years. When I was 19-20 I wrote a load of soft songs. We can’t play any of them live. We were going to do an album under a different name and call it Wet Sounds but had to abandon the idea cos Go Discs weren’t into us going under a different name. We loved those songs, all nice lightweight 1966 pop songs. I was great to write those.

(There was a load of general chat here about bands having loads of great unreleased material and conversation turned back to the Easybeats).
I met George Young of the Easybeats a couple of years ago because we wanted him to produce us. But he came to tell me he didn’t produce anymore. He sat me down and gave me a two hour talk on how to look after myself in the music business, which was amazing. Because basically he’d fucked up badly. There was unreleased material of theirs left, right and centre. Albums cancelled and stuff. He just told me how to compose myself and to smoke a lot less of that stuff. Cos he used to be on it all the time and now he’s the most together man in the world. He’s just into looking after his family, which is really nice. He just told me to never forget my family.

So there you have it. A definite mellowing in The Stairs camp. Don’t worry about talk about getting modern sounding, as having heard some of the new songs live a few times I can tell you there are some real crackers there. ‘It Was Alright’ is as good a track as they’ve done previously and would have easily on Mexican R’n’B. As for some of their more experimental stuff, well, it’s simply brilliant. It may take some time before any of it sees a proper release, so make sure you go and see them live, they’ll knock yer socks off! 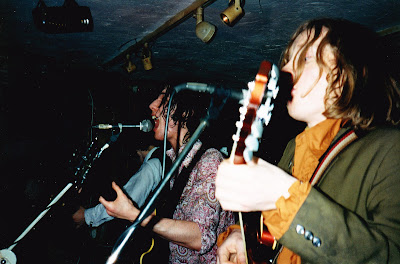 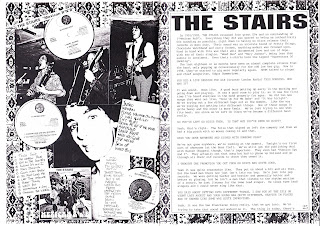