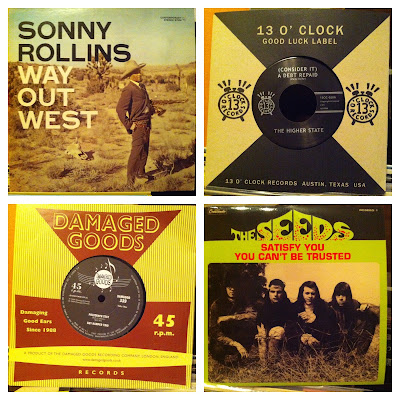 These babies have been getting a lot of love this month...

2.  Sonny Rollins – “I’m An Old Cowhand” (1957)
From Way Out West, with Sonny on tenor and dressed as a cowboy, Ray Brown on bass and Shelly Manne on drums. As Rollins explains on the sleevenotes, he wanted a “loping along in the saddle feeling… I want the cat out on the range all the way”, and on this hokey old tune (see Bing Crosby’s 1936 version) he gets it and it makes me smile every time.

4.  Jill Harris – “Baby, Won’t You Try Me” (1964)
I heard Nick Beckett play this on his Dr Gonzo’s Medicine Show on Fusion the other Sunday and it blew my mind. Jill Harris leads the raucous call and response with Dee Dee Warwick, Cissy Houston, and Sylvia Shemwell on backing vocals on a track which has hands clapping in the church and feet stomping on the dancefloor.

5.  The Seeds – “You Can’t Be Trusted” (1965)
This previously unreleased take, recorded on 20 July 1965, finally sees the light of day on a new limited edition Record Collector 45 and, especially when heard in isolation, highlights how utterly unique and ground breaking Sky Saxon’s wonderfully warped version of the blues really was at the time. They’d have garage imitators by the thousands but The Seeds were originators.

6.  Ken Boothe – “Moving Away” (1968)
Being largely ignorant to rocksteady I was only familiar with Kenny Lynch’s version but must hand it to Kenneth, this is fabulous.

7.  Roberta Flack featuring Donny Hathaway – “God Don’t Like Ugly” (1979)
This caught my ear in the pub the other night so had to investigate. I actually thought it was a later release due to the production but the vocals are great and the melody stayed in my head, even after six pints of ruby ale and a couple of Southern Comforts.

8.  Guy Hamper Trio – “Polygraph Test” (2009)
The Guy Hamper Trio – Billy Childish, Nurse Julie, Wolf Howard – are joined by James Taylor for a rollicking slab of garage-punk-jazz, the likes of which haven’t been heard since Mr Taylor’s earliest forays with his own quartet.

9.  Bob Dylan – “The Night We Called It A Day” (2015)
Bobby was in good form at the Royal Albert Hall on Sunday. A few things struck me: (a), almost everything was post 1997’s Time Out Of Mind; (b), because the set is therefore mostly what could be called “new” material (notwithstanding some is now nearly 20 years old) Bob doesn’t feel the need to wildly reinterpret them; (c), both these things are very welcome; and (d), the half dozen tracks from his recent Shadows In The Night LP – songs previously made famous by Frank Sinatra given a pedal-steel arrangement – provided many of the highlights, with the style suiting Bob who put notable effort into his singing. As I’ve said before, there’s Bob Dylan, then there’s everyone else.

10.  The Higher State – “(Consider It) A Debt Repaid” (2015)
Folkestone’s folk-stoned garage combo in typically disaffected mood on their new two-minute 45, complete with acidic tongue, swirly organ and a jangle so sharp it’ll cut ya soon as look at ya. Released, I’m sure to their delight, on 13 O’Clock Records out of Austin, Texas.
Posted by Monkey at 17:23