JIM JONES AND THE RIGHTEOUS MIND at OSLO, HACKNEY 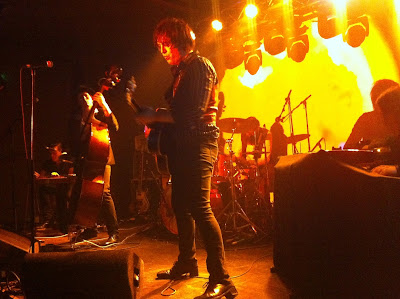 For whatever reasons, and I don’t know what they were, contenders for the most exhilarating live band to fill my ears and eyes, the glorious Jim Jones Revue, disbanded a year ago; now Jim’s back in town to show he still really knock ‘em down.

The set falls into three sections. The first is a clattering cauldron of percussive voodoo rhythms and guttural chanting to summon the spirits and stir the soul. Jim leads the mantra "Give Everything, Take Everything" before the blood curdling debut single 'Boil Yer Blood' mixes up the medicine with three parts Screamin’ Jay Hawkins and one part a torn-off half-riff scrap of ‘Sunshine Of Your Love’.

Jones is the master of ceremonies, as always, but he keeps Gavin Jay on bass from the Revue and the pair are flanked by a Marilyn Manson lookalike keyboard player and pedal-steel player who lays on the ghoulish effects. Behind them, sitting in on drums, is the unmistakable bearded figure of Bad Seed and Grinderman Jim Sclavunos; who fits like a black glove with the gothic nature of proceedings. My red shirt being a rare splash of colour in the blackest of seas.

In keeping with the apparent intention to create a new distinct identity away from Jim’s previous bands (add Thee Hypnotics and Black Moses to the list), there’s a notable lack of guitar wailing and a slow three song segment with Jay playing what to my ignoramus mind is a double bass with a bow, plus Jim singing in a lower, softer register cements this. In a live setting some of the subtleties of these more cinematic, almost Tom Waits tinged songs, probably get lost and ‘1000 Miles From Sure’ benefits from listening to the recorded version.


After this interlude, Jay straps his bass on again, bashing away at his knees like all great bassists, and the pedal-steel makes way for another guitar. From here on in we’re back on familiar ground, albeit with unfamiliar songs. No matter, they’re instant adrenaline rushes. Two guitars held out front and the Righteous Mind are rocking the joint. The two encore songs – one making me think of a bastardized offspring of John Lee Hooker’s ‘Big Legs, Tight Skirt’ – bring the already smouldering pot of bone crunching gumbo stew to the boil.
Posted by Monkey at 11:39