THE PRIME MOVERS at the BLUES KITCHEN, CAMDEN 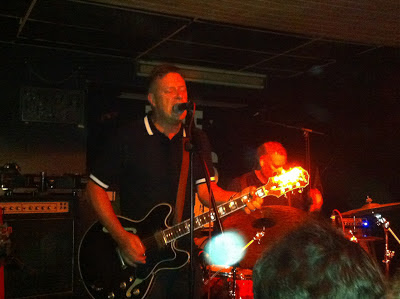 I last saw Graham Day in 2008 promoting the second Graham Day & the Gaolers album Triple Distilled at the 100 Club. Since then, nothing, an uncharacteristic silence. So an out-of-the-blue reappearance of The Prime Movers, alongside Allan Crockford and Wolf Howard, was cause for considerable excitement last week.

“Where did you lot all come from?” queried Day as he surveyed the squash in front of him before hurtling into “Good Things” and “No R.E.S.P.E.C.T” from their first album, Sins of the Fourfathers, dusted off for the first time in nearly 25 years. I’ve seen Day more times than any other performer and yet the sight of him sloshing his low slung Epiphone around and the sound of his menacing whiskey and fags growl still gives me a kick.

The Blues Kitchen is a mixed blessing of a venue as it puts on some decent bands for free but is also on the Camden tourist beer trial and therefore one is required to rub shoulders with those not knowing or caring their Wolf Howard from their Howlin’ Wolf. The vast majority at the stage end of the room were there specifically (including a car load who’d driven all the way from Middlesbrough) so the raucous reception given after the first couple of songs was such that it prompted one bemused young fella next to me to turn to his mate and say “They must’ve been famous”.

If they didn’t know who they were watching Allan Crockford suffered a similar identity crisis after “Mary” from The Solarflares Psychedelic Tantrum.  “Who are we supposed to be? The Prime Movers? The Solarflares?”

As the set progressed it became apparent this wasn’t strictly a Prime Movers gig. Some might argue without Fay Hallam it wasn’t the Prime Movers anyway but she wasn’t in the original line-up and as much as I loved Makin’ Time I struggle nowadays with her flat foghorn voice so she wasn’t missed by me, especially when the set provided an almost complete overview of Graham Day’s career throwing in surprises with songs by The Prisoners and The Gaolers to add to the Movers and Flares.

Like his counterpart Billy Childish, Day has resolutely stuck to his well-practiced song writing formula. Childish is the spiky abrasive garage punk left arm of the Medway scene; Day is the sturdy brickshithouse garage rock right arm, exemplified by the “Hendrix for dummies” version of “Freedom”. Such is Day’s trademark style – and those of Wolf and Crockford – that any randomly gathered songs from his/their back catalogue don’t sound out of place next to each other.

The Prisoners will always hold extra magic for me. I’m always sceptical when people claim to have worn records out (it’s not that easy) but the closest I’ve ever came is as a teenager playing The Last Fourfathers over and over and over. Hearing “I Am Fisherman” again was – still – a great thrill, as was “Love Me Lies” and "Be On Your Way".

The band’s name wasn’t important, what mattered was hearing a selection from Graham Day’s mighty songbook and seeing him back playing live. Hopefully this’ll give him a taste for it once more. Despite the assumption of those youngsters earlier he has never been “famous” and I doubt he gives a shit these days, but during “Begging You” he demands “Treat me with the respect I deserve”. That’s the very least he’s owed.

Set list was something like this: Good Things, No R.E.S.P.E.C.T, Mary, Freedom, You Don’t Want Me, I’m Alive, Be On Your Way, Alone In This House, Living In My Own Nightmare, You Always Find A Way To Hurt Me, I Don’t Care, Sucking Out My Insides, Get Off My Track, Can’t Get You Off My Mind. First encore: Sitar Spangled Banner, Love Me Lies. Second encore: Begging You, I Am The Fisherman.
Posted by Monkey at 18:00