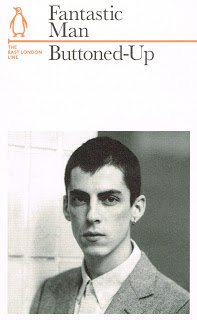 When worn without a tie, should the top shirt button be done up or left undone? It’s a sartorial choice – the simple act of opening or closing a single button – which can transform a look.

Gert Jonkers and Jop van Bennekom - editors of fashion magazine Fantastic Man - have given it plenty of thought and Buttoned-Up explores and celebrates the practice of buttoning-up one’s shirt. It forms part of a series of Penguin paperbacks marking 150 years of the London Underground, each book using a different tube line as its inspiration. This one is for the recently extended East London Line which now takes in a new station, Shoreditch High Street, a hotspot, the authors claim, for the capital’s buttoned-up gentlemen. And it’s true. I live in the area and the last time I saw a shirt unbuttoned at the neck was in 2006; around the last time I witnessed a chap without tattoos, glasses and a beard.

I’m a fairly recent convert to (sometimes) buttoning-up shirts (Smedleys and polos should always be done up) but it does depend on the whole outfit: what is worn and how. One thing I will say is the very act of buttoning-up always displays a deliberate choice, an obvious awareness and consideration of a look rather than a possible haphazard thoughtlessness. It’s possible living in Shoreditch/Brick Lane/Broadway Market territory has subconsciously influenced my decision making as previously I thought it far too 80s, conjuring visions of wedge-haired pop groups playing big guitars too close to their chins or of Rik Mayall in The Young Ones.

There’s both an 80s slant and a Mod angle within the book’s six short essays. Neil Tennant talks about a gay club, Benjys, in Bethnal Green where the entire crowd were Mod’s arch foes at the time: casuals (although I’m amazed the interviewer, a fashion editor, didn’t know what a cagoule was). Even as a staunch proponent of buttoning-up Tennant admits it gives a rather repressed look and he would’ve reconsidered if cursed with a fat neck.

Gert Jonkers thinks Ray Davies “kind of invented the look” and Simon Reynolds is the latest writer to ruminate on Mod. He claims Mod’s propensity to violence was also inherent in their style, “the neurotic fastidiousness of dress and grooming was a sort of voluntarily worn straightjacket, a near-masochistic set of constraints and rules” and a rejection of the class system. “Mods displaced and exceeded this by an invented and freely chosen class system based on style: one that allowed for even greater snobbery, a superiority complex founded on esoteric knowledge and the masterly of subtle stylistic rules that changed by the week.”  I can dig that.

Whether you read Buttoned-Up sitting on the tube or at home it’ll make you think twice the next time you pull a shirt from the wardrobe.

Buttoned-Up by Fantastic Man is published by Penguin, priced £4.99.
Posted by Monkey at 11:06