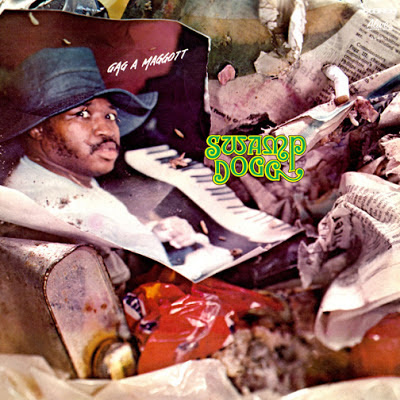 Following Total Destruction To Your Mind (1970) and Rat On! (1971), two more reissues from Alive Records bring the spotlight back on the inimitable Swamp Dogg.

Gag a Maggott (that extra ‘t’ is annoying) was Swamp’s fourth album  and after the previous sleeves depicting him wearing orange shorts sitting on a dump truck and riding a giant white rat, this one sees our hero inside a garbage can with maggots on his face. The cover he says “was designed to make you puke and possibly shit yourself.” Swamp Dogg wasn’t your average 70s soul man.

Once again, in between sessions of hard partying, he cut an album of soulful funk infused with his offbeat humour and natty way with words. “Wife Sitter” is a prime example and one of his best songs as he chortles away at his antics of taking care of other men’s wives. “Don’t worry about your kids, I’ll treat them kind, after all, half of them are mine”  His infectious laugh makes such behaviour almost sound commendable.

“I Couldn’t Pay For What I Got Last Night” is another in-the-pocket groove (Little Beaver on guitar) which give credence to Swamp’s claim that “the album is so funky it’ll gag a maggot” and his rearrangement of “Midnight Hour” breathes fresh life into the original album’s only cover. Maggott isn’t quite up to the standard of the previous albums and has one horrible calypso track - “T T” - but it still shows Swampy as a unique talent, perhaps only now getting his dues. As his says in his new liner notes, “Hell, I was great back then, but I was the only one who knew it or gave a goddam”. 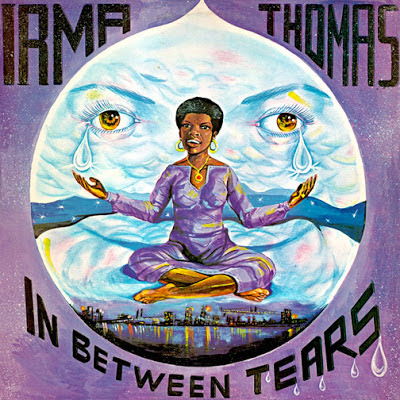 In addition to his own releases Swamp cut records on others; Doris Duke perhaps the best example (if you’ve not heard her I’m A Loser LP, get on it), and in 1973 he produced and wrote most of an album for Irma Thomas, In Between Tears; her first LP since her glory (such as they were) days at Imperial in ’66.

Gritty and strident, Thomas is in strong voice throughout. Some tracks, like “You’re The Dog (I Do The Barking Myself)” sound like a Swamp Dogg album with a different vocalist but the way she pours heart and soul into the extended raw blues version of her old hit “Wish Someone Would Care” is totally her own and the result spectacular. “Turn My World Around” is more danceable (reminiscent of Duke’s killer “I Can’t Do Without You”) and ends the record on an upbeat note. The cover artwork though is more ghastly than anything ever to adorn Mr. Dogg’s work.

This reissue also features a couple of bonus cuts on the CD and a story from Dogg how he and his band kept an eye on Irma whilst making the record. No wonder when he bumped into her years later she made out she didn’t know who he was. You’ll have to buy the CD to find out more…
Posted by Monkey at 16:08