THE JIM JONES REVUE at the SEABRIGHT ARMS, HACKNEY 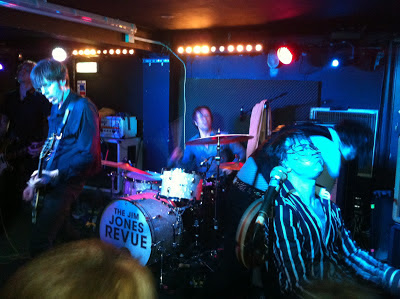 I’ve featured the Jim Jones Revue plenty of times so there’s no need to say much here beyond reiterating what a phenomenal live band they are.

The current album, The Savage Heart, is a slight departure and has shed most of their ear shredding distortion but on stage they remain an unstoppable force of nature. Mr Jim Jones, with his primal balls-to-the-wall scream, is the master of ceremonies and chief whip cracker but this is a Revue who ALL go at it hammer and tongs. Live performances don’t get more exhilarating than when they set about punching the living daylights out of “Elemental” and “The Princess and the Frog”. Even newer material which doesn’t leave much of an impression on record was transformed into urgent, attention demanding, impossible to refuse commandments.

This was the final show of their special Seabright Sessions – four nights in an intimate 150-capacity venue to promote new single “7 Times Around The Sun” – and for an encore were joined by Hollie Cook and Annie Bea. Together they delivered the most impassioned cover of “Tin Soldier” I’ve ever witnessed. Steve Marriott himself would’ve been proud and us four Mod types stood at the back of a sea of greasy Rockers and nodded approvingly.
Posted by Monkey at 16:23