THE DOORS – WHEN YOU’RE STRANGE at the IDEA GENERATION GALLERY 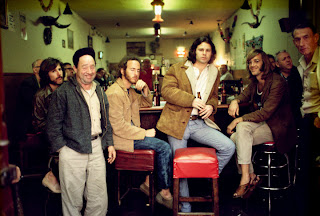 Like a lot of spotty pretentious youths without a girlfriend I was a big fan of The Doors. It’s been so long since I’ve listened to them I don’t know if I still am but back in those strange days between school and work they were my band of choice. I spent my first wages - from stocking freezers in Bejam - in HMV and brought home new albums regularly until Ma Monkey started the “why do you need more records?” line of interrogation. I distinctly remember smuggling L.A. Woman into the house stuffed under my bomber jacket.

Joel Brodsky’s picture of bare chested, lion headed, Morrison would be the one every dope spluttering, curtain haired student supposedly stuck to their wall, my preference – having never, as you can tell, been a student – was for the photo inside the gatefold of Morrison Hotel. All four Doors in a rough blue collar bar nursing Budweisers and tired looks surrounded by neighbourhood barflies. They look a band that for all their poetic and classical leanings were just as comfortable watching sport and the shooting the shit with drunks and Joes. I was jealous of those drinkers. Imagine The Doors wandering in your local for a beer. Years later I would sport a sheepskin jacket almost identical to Jimbo’s, no-one ever spotted the connection but at least I resisted the leather strides.

This exhibition coincides with the release of When You’re Strange – a new documentary on the band – and features photographs by Brodsky, Henry Diltz, Bobby Klein and Ken Regan. Brodsky’s famous picture and variations of the album sleeves he made are here, as are Diltz’s Morrison Hotel shots including contact sheets and previously unseen photos from that day. Klein has a series from their earlier less grizzled (and slimmer) days and Regan snaps them in concert. The press release talks of an “intimate look” and “private moments”. That’s stretching the truth as most – barring Morrison and Pamela Courson gazing lovingly - are from choreographed photo sessions and live performances but they take a good picture.

If you’ve a couple of grand spare you can buy one. Me, I’m off to pull a few old albums from the shelf.

The Doors – When You’re Strange is at the Idea Generation Gallery, 11 Chance Street, Bethnal Green, London E2 until 27 August 2010, admission free. The film of the same name is out on DVD in August.
Posted by Monkey at 12:03