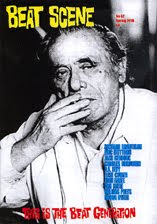 Charles Bukowski may be the cover star of the Beat Scene 62 but it’s the new nine page interview with Carolyn Cassady that steals the issue for me. She’s written and spoken many times about her husband Neal Cassady and lover Jack Kerouac but I’m never less than fascinated by their relationship. I still can’t grasp the hold Neal had over people – Carolyn in particular. Even his portrayal in On The Road isn’t flattering: a con-man and a rat who abandons a sick Jack in Mexico; and that’s without the bigamy and constant philandering she had to deal with. Maybe she was hip and I’m squarer than I’d care to admit.

Continuing the spouses theme, Richard Brautigan’s first wife Virginia Aste is also interviewed. There’s a good article about Kerouac and his time in Detroit with his first wife Edie Parker (who Carolyn memorably refers to as a weirdo and a nut case). Bukowski gets his coverage - reviews and extracts from a couple of newish books. Dan Fante writes about his father, John Fante, and fellow writers blacklisted by Hollywood during the 40s.

Loads of other stuff as usual within its 64 advert-free pages. Four pounds stirling.

www.beatscene.net
Posted by Monkey at 12:25