ABSENCE OF THE HERO by CHARLES BUKOWSKI 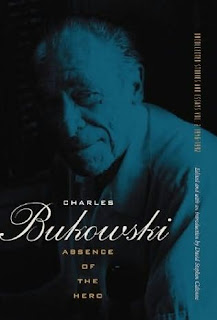 Absence of the Hero follows 2008’s Portions from a Wine Stained Notebook in gathering previously uncollected short stories and essays from Charles Bukowski written between 1946 and 1992. That might sound like a ragbag collection of inferior works – rarity collections often equate to “for fans only” i.e. “a bit shit” – but that doesn’t apply here. Both volumes whether taken as introductions or additions to his famous stuff offer more evidence of his brilliance and (like The Pleasures of the Damned reviewed in February) show a versatility and breadth of writing his naysayers don’t give him credit for.

“The Reason Behind Reason” gets things moving in 1946 with “Chelaski” playing baseball. He smashes a long drive and stands on the plate as players and supporters go berserk at him for not running. Chaos ensues but he’s motionless in the eye of the storm. He looks around and walks off. That detachment from the crowd, that shell, that climbing into himself is carried into “Love, Love, Love” as his mother asks him “why do you keep your eyes on your plate? Why don’t you look at people? Look at me…” It’s not quite misanthropy, as he wrote somewhere I can't remember it wasn’t that he hated people - he just preferred it when they weren’t around. Grumpy git.

There are 39 entries, selected and introduced by David Stephen Calone, covering the autobiographically based stories, the funny flights of fancy (check the gruesome yet deadpan hitch hiking story “Christ With Barbeque Sauce”) and studious examples of literary criticism that belie his drunken bum persona. It’s not quite as good as Portions but only in the way a 4-0 win isn’t quite as good as a 5-0 win; it still wipes the floor with the opposition. Absence of the hero? Who’s he kidding?