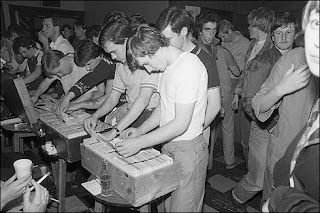 The shadowy world of Northern Soul is, on the face of it, a peculiar one. Trying to explain it to those who have never experienced it, or just don’t connect with it, is tricky, yet Tony Parker’s documentary Wigan Casino gets as close to any other film in defining its appeal. Made for Granada Television in 1977 it focuses on the legendary all-nighter venue and hears from regulars and staff at the Casino Club.

One unnamed bearded soulie eloquently explains the difficulty people have in understanding why young people from all over the country travel to a run-down northern town, to a casino that isn’t a casino, to a club that doesn’t open until half past midnight, which doesn’t serve alcohol, where you have little chance of copping off, and the music is obscure old soul records no-one else gives a hoot for. The music was the driving force (and remember the only feasible way for most to hear this music was to actually go out to clubs) but the sense of community and of forming an “alternative society” with its own codes of conduct offering escapism and shelter from the dreary lives and loves of the hoi polloi was equally as attractive to many.

The best parts of the film are the dance sequences yet they’re very familiar as whenever footage of northern soul dancing is needed it’s inevitably taken from here. But if you’re hoping the entire 26 minutes will contain a steady procession of flamboyant kung fu kicks and extreme pirouetting then you’ll be disappointed as Parker intercuts with scenes of drudgery at factories, a Socialist Worker seller hawking around the market, and gives space to old timers talking about friends being killed down pit, often to the unbearable soundtrack of god awful folk music. I like the socio-historical framing but others might prefer a tighter focus on kids backdropping to MVP’s “Turning My Heartbeat Up”.

Of all the music I love and of all the ways to enjoy it, there is little to compare to the feeling of being out on the floor in the early hours, at one with the music, executing a deft flick of the foot or a landing a perfectly timed soul clap to acknowledge and empathise with the heartache, teardrops, loneliness and misery of our elder transatlantic brothers and sisters. I went to my first all-nighter at the 100 Club as a sixteen year old and I’m out to one tonight. This has reminded me – if I needed reminding – why I still do it: it gets inside you.

With its short running time, no extras and no booklet, The Wigan Casino doesn’t represent terrific value but as a record of the time, it’s nigh on priceless.

“Tony Palmer’s Classic Film About The Wigan Casino” is released by Voiceprint, priced £9.99.
Posted by Monkey at 00:50