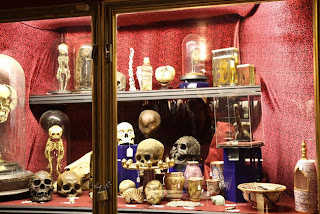 “Just popping down the road to the shops, do you want anything?”
“Yeah, can you get a pint of milk, toilet rolls, a pickled puppy, a two headed snake and some pig snouts painted gold?”
“Yeah, cool, see you in minute”.

As shopping lists go, that looks tricky but not if you know where to go and can summon up the courage to enter the Little Shop of Horrors on the border of Bethnal Green and South Hackney. This part of East London is generously populated with interesting independent shops and galleries but none quite as off the wall as this. The sign on the door warns folk offended by death and decay to keep away and they’d be well advised to heed that warning. Shrunken skulls sit next to bones which sit next to medicine jars which are gazed upon by dead animals and birds. Then there are books, bizarre toys, flannels with “Cuntface” embroidered on them, and heaps of bizarre curiosities I couldn’t quite fathom.

The pickled puppy, the two headed snake and the gold pig snouts were all in stock and although sorely tempted by a stuffed monkey I only bought a pirate ring. It was neither owned by a pirate nor made from one, but if you want to buy a ring made from a pirate this would be the place to look.

The shop is run by The Last Tuesday Society who are “devoted to exploring and furthering the esoteric, literary and artistic aspects of life in London and beyond”. Count me in.

And after all that, I forgot the milk.