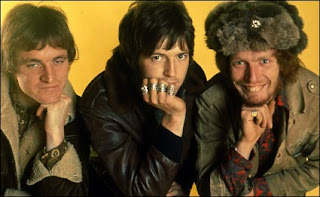 I wouldn’t expect Nick Kent to challenge Art Blakey to a drum battle and I don’t expect Ginger Baker to raise the bar in music writing but even by rock autobiography standard this is disappointing. Never the easiest person to warm to, there’s little here to thaw Baker’s public persona. Showing little emotion (beyond the occasional burst of anger) he comes firmly from an era and a mindset where men were men and spoke with their fists, women were always chicks, and homosexuals were nancy boys. He leaves an impression of a sexist, snobbish, arrogant thug full of an inflated sense of self importance.

There’s no disputing his prowess behind the drums (as he relates countless times) nor the standard of bands he played with during the early 60s jazz scene and then the Graham Bond Organisation, Cream, Blind Faith, Airforce and all his African projects yet nothing is given a context; there’s no sense of changing eras or environments, just a loop of drums-drugs-chicks-fights, with a few road traffic accidents and horses thrown in. When a book about a musician doesn’t create the urge to discover or rediscover their music you know there’s something wrong. And when all the would-be interesting music stuff is confined to the first half of the book the second half is a chore.

I had to laugh though when he bleats like a child about his lack of song writing royalties from Cream. The way he tells it he should be entitled to a share of the royalties because he changed the intro to “White Room” from 4/4 time into a 5/4 bolero. That’s not really how song writing works dear boy. I might record Clapton’s “Wonderful Tonight” in the style of the Ramones tomorrow and see if Eric will cut me in for a slice.

There’s no need for another Rock Star’s My Drug Hell saga but his drug addiction is so lightly touched on there’s little appreciation for it. Maybe it was no big deal. The most memorable thing about first taking smack was it enabled him the complete a couple of crosswords. Elsewhere his callousness is startling: events such as abortions are passed over in two lines. He then gives up said chick as his polo club deems she comes from too poor a family. Charmed, I’m sure. Likewise, if he refers to the death of a close friend as “sad” you can call that a deep show of emotion. At his own son’s wedding service he fell asleep and acted like a dick all day without a shred of remorse.

Baker also whinges about – and stopped publication of – other biographies about him, referring to them as “crap”. Hellraiser, and his reluctance to open up and move beyond A to B to C, leaves the reader wondering if instead of being crap they merely got closer to an even more uncomfortable truth.

Hellraiser by Ginger Baker is published by John Blake, priced £18.99

PS: How bloody great does Eric Clapton look in that picture?
Posted by Monkey at 19:42