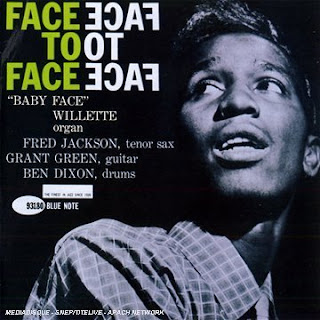 Ten songs for the merry month of March.

1. Blind Willie McTell – “This Is Not The Stove To Brown Your Bread” (1929)
March’s sponsored blind bluesman - the Dylan favourite Willie McTell - gets help (whether he wanted it or not) from his woman on this very funny put-down duet.

2. “Baby Face” Willette – “Swingin’ At Sugar Ray’s” (1961)
James Brown would ask if he could “play some organ”. No one was in a position to refuse or even answer, but if they had then they would probably have said “no, Mr Brown you can’t actually play the organ you simply whack your clumsy fat fists over the keys to see what noises come out”. Then they would have been fired. Willette’s Hammond playing on his first album Face To Face reminds me of Brown’s. It’s no bad thing, especially as tenor man Fred Jackson is on hand and if you’re looking for a proto-Acid Jazz album then it’s as good as any.

5. Tobi Lark – “Happiness Is Here” (1965)
As Tobi Legend she cut “Time Will Pass You By” but it’s these three minutes of unbridled northern soul joy that get me.

6. The Beach Boys – “Help me Rhonda” (1965)
What is it with Dennis Wilson’s Pacific Blue? Sounds like plenty of other horrible 70s solo albums that should be avoided.

7. Another Sunny Day – “You Should All Be Murdered” (1989)
The Smiths “too commercial”? Wanting to up your indie cred? Then try the budget priced Poundstretcher version.

8. Dinosaur Jr. – “We’re Not Alone” (2007)
It’s only the wailing guitar solo that prevents this from passing as The Lemonheads. A compliment to both.

9. Len Price 3 – “After You’re Gone” (2009)
“So Sad About Us” mixed with the chime of The Hollies via the Medway delta for a pocketful of punky powerpop. Great fun. Love it.

10. Dan Sartain – “Atheist Funeral” (2010)
Just the trick to take over Robbie Williams’s “Angels” as the nation’s favourite funeral singalong.
Posted by Monkey at 19:54