THE AWAKENER: A MEMOIR OF JACK KEROUAC AND THE FIFTIES by HELEN WEAVER 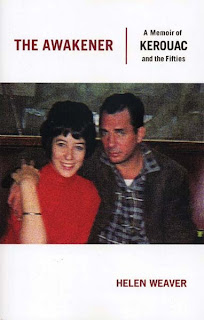 Twenty years in the writing and over fifty years since the event, no one can accuse Helen Weaver of being quick to cash in on her short love affair with Jack Kerouac.

Kerouacologists (just made that up) will know Weaver as “Ruth Heaper” in Jack’s Desolation Angels. When Jack turned up on her New York doorstep with Allen Ginsberg in late 1956 looking for a pad to crash, they immediately got together and Jack stayed for a couple of months until his drinking and general disturbance gave her too many sleepless nights. Asking him to find somewhere else to stay during the week so she could get some kip for work in the mornings, Helen hadn’t meant to finish the relationship, but that was the effect as Jack quickly hooked up with Joyce Glassman. For Joyce’s version of events, see Minor Characters by Joyce Johnson (nee Glassman).

According to Jack, he was dumped on the advice of Helen’s analyst, which wasn’t the case. “I rejected him for the same reason America rejected him” she says, “he interfered with our sleep”.

It’s fascinating to read Desolation Angels, Minor Characters and The Awakener side by side to compare accounts. Joyce referred to Helen as “boyish, sloe-eyed and under analysis”, and in turn Helen calls her “a little round blonde person” and with obvious glee reports others coining her “Pudding Face” and “The Unbaked Muffin”. It is far from a bitch-fest though and there’s a touching moment in 1994 when the women embrace at a Beat conference.

Using her diaries, letters and notes she kept, Weaver writes with an engaging, warm style and paints an intimate portrait of Kerouac. With On The Road still a year until publication, he was in bad shape both mentally and physically with his alcoholism apparent for all who cared to look. “I had seen the sadness in his eyes and pretended in was poetry. Now I looked into his eyes and saw not poetry but despair. They were the eyes of a man looking down the road that led nowhere but the grave”.

Their relationship didn’t last long but Helen explains how her attachment has grown over the years as her appreciation of Jack’s writing has increased. The Awakener is a thoughtful tribute to a man who not only awoke Helen Weaver but who helped wake America with his unique poetic style. Not that they thanked him of course, until it was much, much too late.

The Awakener: A Memoir of Jack Kerouac and the Fifties by Helen Weaver is published by City Lights, priced $16.95.
Posted by Monkey at 19:12