THE HACIENDA MUST BE (RE)BUILT: THE LUCID DREAM live at THE VICTORIA, DALSTON 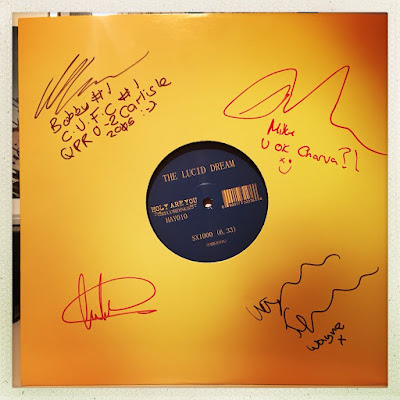 When posted online it wasn’t greeted with universal acclaim from their fanbase. Devoid of guitars and lyrics, ‘SX1000’ is an unabashed tribute to the acid house era that elicited cries of “Utter pap, sozz but shite”, “Dunno if this is a gimmick type tune or what..”, “Come on boys, WTF is this pish, get back to what your good at” and, my favourite, “How do you go from Bad Texan to this?” Apparently, there were worse, but those comments have been removed. Hence the band’s cheekily knocking up a load of ‘Psych Traitor’ badges to give away.

Those criticisms were, of course, in the minority and on Thursday in East London, through a thick fog of dry ice, they showed, once again, what a remarkable live band they are, showcasing new tracks among a selection of established favourites.

The distance between ‘Bad Texan’, one of the jewels in the band’s recorded crown to date, and ‘SX1000’ isn’t that far at all, as the 2016 track already owed far more to the hypnotic rhymical second Summer of Love than the original flower power one and served as a pointer to where the band were heading next. Let’s not forgot, The Lucid Dream’s take on whatever ‘psych’ is, has incorporated garage rock, dark psychedelia, heavy dub and a Germanic motorik beat.

The other new songs weren’t as extreme as the single and meshed easily into the set which included a broken melodica-free ‘I’m A Star In My Own Right’ and the otherworldly Joy Divisionesque epic finale ‘Epitaph’. Standout moment though came in the shape of penultimate song, ‘Ardency’, which, even on first hearing, would’ve raised the roof of the Hacienda, an instant Madchester classic. Watch out for this when the next album arrives (date tbc).

‘SX1000’ might’ve been a radical move for sluggish bands happy to regurgitate the same style but that’s not The Lucid Dream’s technique. ‘SX1000’ hits a trance inducing, squelchy acid house groove with an unforgettable hook and adds yet another angle to a band already blessed a multitude of dimensions. Try to keep up everyone.