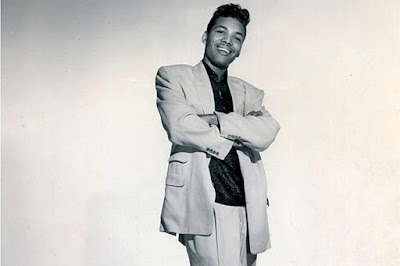 1.  The Drifters – ‘I Gotta Get Myself A Woman’ (1956)
Johnny Moore on lead vocals is desperate for a woman he can call his own. “Doesn’t matter if she’s young or old, if she knows to do the things she’s told, and stay in beside me night and day…” You’ve been warned ladies.

2.  Larry Williams – ‘Little School Girl’ (1960)
Larry Williams (above) led, according to his Wikipedia entry, a “life mixed tremendous success with violence and drug addiction”. And that’s underplaying it. Personal stuff apart, his records packed a punch that reverberates to this day.

3.  Buddy Miles Express – ’69 Freedom Special’ (1969)
Get on board this rolling instrumental produced by Jiminy Hendrix (mercifully free on guitar mangling).

4.  J.J. Jackson – ‘Does Anybody Really Know What Time It Is?’ (1970)
Tired of New York’s boogaloo beat and noticing “the only difference between me and last week’s ‘soul star’ was 100 pounds and which words got emphasised in ‘Can you feel it?’” Jackson hit it and quit to London where he hooked up again with some of the British jazzers with whom he’d recorded his ‘But It’s Alright’ hit but took a more progressive path on J.J. Jackson’s Dilemma.

5.  C.C.S – ‘Sunrise’ (1970)
Alexis Korner’s bluesy big band project where given an extra dimension by having classically trained John Cameron (he of ‘Kes’ fame) arrange their debut LP. C.C.S still for the most part kick arse but Cameron is unmistakable on the woodwind parts of this.

6.  George Duke – ‘Au Right’ (1971)
Opening track from The Inner Source and the Duke is getting frisky on his Fender Rhodes and Wurlitzer electric piano. Do you feel au right? Yes George.

9.  Bettye LaVette – ‘Don’t Fall Apart On Me Tonight’ (2018)
On Things Have Changed Bettye LaVette braves the treacherous waters of the Bob Dylan cover where previous washed up failures lay broken on the rocks. LaVette makes a fair fist of it and occasionally, like on this from Infidels, reveals the greatness that hid beneath the original’s terrible 80s production. “Maybe I could’ve done some good in the world instead of burning every bridge I cross”.

10.  RW Hedges – ‘Signalman’ (2018)
Released last Friday, The Hunters In The Snow is an enchanting delight from beginning to end with not one tiny morsel of fat or waste. The spooky ‘Signalman’ feels like an ancient classic chiming with the distant echo of ‘Wichita Lineman’.
Posted by Monkey at 10:37