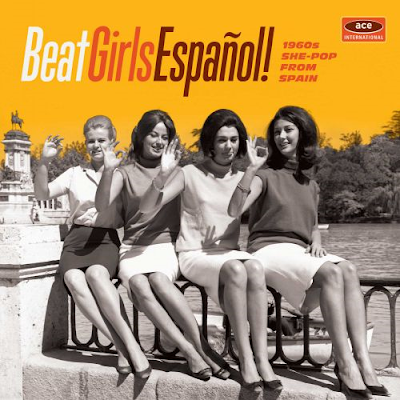 The sun’s out so the ideal time to enjoy a succession of sultry señoritas with single names, as they belt out Spanish 60s yé- yé sounds packed with perky punch and fiery flamenco rhythms.

Without requisite linguistic skills the ear automatically tunes to other elements, such as the arrangements, which are frequently masterful with no expense spared concocting these teenage symphonies, and vocal styles mostly delivered with full-blooded gusto.

There are translations of familiar numbers – Pet Clark’s ‘Colour My World’ converts to Gelu’s modish ‘Pinta Mi Mundo’ and ‘Get Off Of My Cloud’ loosely becomes ‘Aquí En Mi Nube’ by Sonia – but it’s Adriángela’s ‘Nunca Hay Bastante’, Lorella’s ‘Tendrás Que Llorar’, Massiel’s ‘Las Rocas y El Mar’ and Soledad Miranda’s ‘La Verdad’ that stand out for sheer drama while Pic-Nic offer soothing respite with the dreamy ‘El Es Distinto A Ti’. Just as the collection threatens to run out of steam, Conchita Velasco turns up the heat with a crazily camp ‘Calor’.

I hazard very few tracks would’ve been considered ‘cool’ at the time, parts invariably stray into Benidorm straw donkey territory and it can feel like you’re stuck in the heats of the Eurovision Song Contest but, curiously, those aren’t negatives, they simply add to the fun of this collection. Don’t fight it, Viva España!

A version of this review first appeared in Shindig magazine and is based on the 24-track CD; a 14-track vinyl edition is also available now on Ace Records.
Posted by Monkey at 10:06