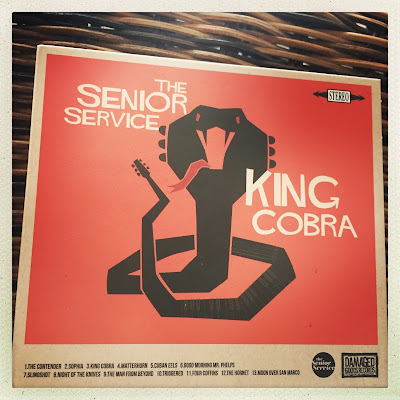 Graham D and the Medway Group return for another soundtrack inspired instrumental album following their 2016 debut, The Girl In The Glass Case. The Senior Service know their onions and King Cobra is an exceptional case of the sequel overshadowing the original as they serve up an even deadlier concoction.

Graham Day’s DNA is the most instantly recognisable but he’s only the mastermind behind half the escapades, this is the work of a ruthlessly effective quartet. Jonathan Barker, Darryl Hartley and Wolf Howard the other guilty parties.

It’s a dusty road littered with bodies. Sophia Loren rises from her bed, mysterious strangers appear, a barroom brawl, Clint Eastwood chews a match, a funeral procession passes through town. John Barry and Ennio Morricone, heads together in a Kentish lock-up with twang and trumpets, Hammond and harmonies, paint the landscape.

The foundation of choppy riffs, spiralling organ and hammering rhythms the Service are known for remain, but as moods shuffle and wriggle between scenes intricate details of their meticulous planning reveal themselves: horns and shakers, vibes and accordion, rich textures in their armoury.

King Cobra is non-stop action, a soundtrack album with all the boring bits eliminated. You’ll be charmed.

King Cobra by The Senior Service is released by Damaged Goods on Friday 27 April 2018. Available to order here.
Posted by Monkey at 11:06