TRAVELING SOUL: THE LIFE OF CURTIS MAYFIELD by TODD MAYFIELD with TRAVIS ATRIA (2017) 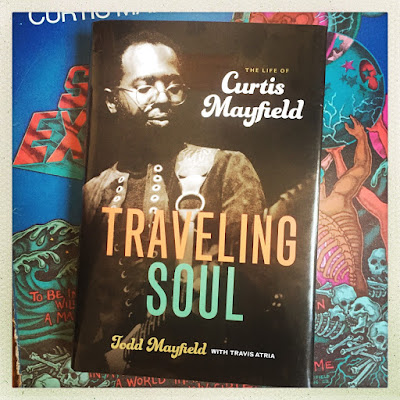 But what do we really know about Curtis, the man? Written by Todd Mayfield, Curtis’s second-eldest son, with Travis Atria, this new and long overdue biography paints the fullest picture to date: detailing both his genius and sides of his personality hitherto unknown to fans such as I.

The first thing to note is this biography hasn’t been authorized – nor endorsed - by the estate of Curtis Mayfield. Mayfield had ten children and following his death one can only imagine the bunfight over control of his estate. It’s a shame this book isn’t officially recognised – there’s no mention of it on the Curtis Mayfield website – as it’s a respectful, considered, articulate and loving portrait. It’s abundantly apparent how proud Todd is of his father, particularly how his music is indelibly entwined with the civil rights movement. It does however reveal elements of Curtis’s character that smudge his clean reputation. While nothing too extreme, when compared to many other soul superstars, among his considerable strengths he – like anyone – had weaknesses.

Growing up in Chicago, poor, a quiet and solitary child, insecure of his looks, beaten at school, shackled him with the classroom nickname Smut – a dark stain or blot – music offered a chance to be somebody and control his destiny. In music and business, Curtis was a quick learner. In 1958, and at the tender age of 15 he was in the Impressions, with a hit record under his belt, and on stage at the Apollo; by 18, he’d already formed his own publishing company, something relatively unheard of for young black performers bar Sam Cooke, and soon settled on a mantra of “own yourself”. Curtis Mayfield possessed an intense need for control in all areas. He was also shrewd, determined, talented and blessed with both a distinctive voice and unique guitar tuning. Some combination.

Mayfield’s prolific work rate was superhuman. Not only writing and performing for the Impressions throughout the entire 1960s (and to an unfaltering standard, there is no bad Impressions period during that decade, if you can find me any other group to do that, I'm all ears) he was racking up hits for Major Lance, Billy Butler, Gene Chandler and other artists for Okeh Records; for Jerry Butler at Vee-Jay; and providing material for acts such as the Five Stairsteps and the Fascinations on his own Windy C and Mayfield labels. Come the 1970s, he’d left the Impressions yet continued to work with them and in the first seven years of going solo wrote fifteen studio albums for himself and others. That he sustained such high quality-control for so long is nothing short of miraculous.

Beyond the music, Todd Mayfield reveals a man of surprising contradictions. Curtis made a phenomenal amount of records yet scarcely listened to others’ music; he helped soundtrack the civil rights movement and was ‘socially conscious’ yet never voted; wrote songs containing deep spirituality yet wasn’t particularly religious. He was relaxed and easy going with musicians yet a borderline recluse at home, more comfortable locked in his room than socialising with friends and family.

Then there are those weaknesses, and it’s likely the exposure of these have rattled the cage of Mayfield’s estate. Curtis, possibly understandably considering his formative years, never learnt to keep it in his trousers once opportunities presented themselves. There are some drug issues; I wouldn’t expect otherwise. Harder and sadder to read are the temperamental outbursts of violence towards his partners. Todd doesn’t shy away from these issues and credit to him for that although he frequently appears to excuse his father’s less savoury and divided side on him being a Gemini, which is handy to know if you’re born within that star sign.

The final chapter in Curtis’s story is, of course, one of utter tragedy. I had to brace myself simply to read it, so goodness knows what it took to write. At an open-air show in Brooklyn on 13 August 1990, Curtis Mayfield was introduced to the audience. He walked across the stage, guitar strapped across his body, and then “Hell paid him a visit”. It was the last time he walked or felt his guitar. Gusts of wind sent lighting rigs crashing into the back of Curtis’s neck. He was 48 and spent the rest of his life a quadriplegic. The longest living quadriplegic on record survived ten years. Curtis lasted, often in sheer agony, for nine, never succumbing to self-pity or asking – aloud at least – ‘Why me?’

Traveling Soul is essential reading, packed with revelations and puts Mayfield's music in context of the times. Todd’s assessments of his father’s albums are even-handed and his insight into his character illuminating. It contains a mix of thorough research and personal experience. He tells it like it was, sugar coating nothing. It’s real, it feels like the truth, from the heart. Perhaps Todd occasionally overplays Curtis’s influence and legacy but that’s understandable, it’s his dad after all. For me, after reading this, Curtis Mayfield might not have been a saint but his heavenly light shines brighter than ever.

Traveling Soul: The Life of Curtis Mayfield by Todd Mayfield with Travis Atria is published by Chicago Review Press, out now.
Posted by Monkey at 11:07