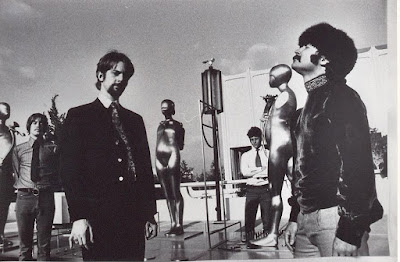 1.  The Byrds – ‘My Back Pages (alternative version)’ (1967)
Oh wow, how have I only now heard this version with spooky, spacey organ? Was already a brilliant track, now even better.

2.  Helene Smith – ‘You Got To Be A Man’ (1969)
Liberally stealing from JB’s ‘Out of Sight’, ‘Papa’s Got A Brand New Bag’ and ‘It’s a Man’s, Man’s, Man’s World’, Helene’s 45 is almost a cheeky medley. Produced by Little Beaver, which isn’t especially relevant but I just wanted to write it.

3.  Dee Clark – ’24 Hours of Loneliness’ (1970)
A far superior and more atmospheric version of the Dennis Yost & The Classics' hit and a 45 which almost makes me forgive Clark for subjecting me to countless hearings of the abomination that is ‘That’s My Girl’. One slight quibble is it fades out too quickly; not something I usually complain about.

5.  O. V. Wright – ‘Ace of Spades’ (1970)
Super southern soul man Wright didn’t – for some unfathomable reason – trouble the charts much despite a long career (although imprisonment for drug offences didn’t help). ‘Ace of Spades’, a mean funky stew, hit number 54 on the US Pop Chart and was his most successful 45.

6.  Colin Blunstone – ‘Misty Roses’ (1971)
After a shaky start to his 100 Club gig last week Colin Blunstone put on an enjoyable show for the best part of two hours with only three Zombies songs and the rest taken from his solo records. When the band dropped back to allow Colin’s voice air to breathe, such as on Tim Hardin’s ‘Misty Roses’, the results were spellbinding; you could’ve heard a pin drop.

7.  Oscar Brown Jr – ‘A Dime Away From A Hot Dog’ (1972)
Laid-back deep funk from the ever-poetic Oscar on this opening cut from his Movin’ On LP. A killer band featuring David ‘Fathead’ Newman offer breaks a-plenty.

8.  Georgie Fame – ‘Thanking Heaven’ (1976)
Don’t let the year and that this was a B-side put you off, this is Georgie in swinging soul mood complete with Memphis-style horns.

9.  Otis Clay – ‘Wild Horses’ (1997)
The arrangement sticks close to the Stones and the Burritos but Clay’s vocal is all him.

10.  Conor Oberst – ‘A Little Uncanny’ (2017)
The first great track of 2017 goes to Conor Oberst for this Jane Fonda and Sylvia Path referencing woozy, bluesy, barroom rocker. The video is worth a look too.
Posted by Monkey at 18:29