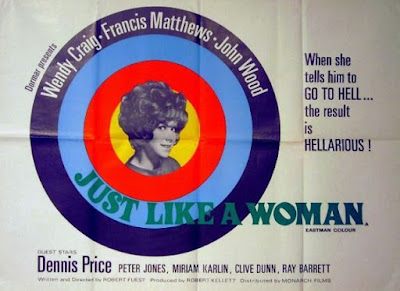 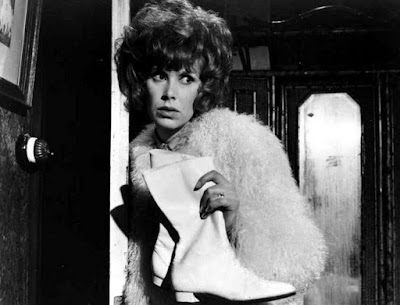 Just Like A Woman was Robert Fuest’s debut as a film director, sandwiched between his work on The Avengers where, as an employee of ABC, he worked as a production designer from 1961 before returning after his film to direct eight episodes starring Linda Thorson as Steed’s latest partner to arrival seconds too late to prevent a string of bizarre murders.

Just Like A Woman - starring future Butterfly, Wendy Craig, and soon-to-be voice of Captain Scarlett, Francis Matthews, as a sparring television industry couple whose marriage has broken down - with its art deco and pop art design, cutting edge architecture, cusp of mod-into-swirly fashions, loopy characters and directorial quirks it couldn’t be more height of ‘66 if it tried; like the world didn’t exist before and wouldn’t after. Fuest wrote the screenplay, directed it and even wrote song lyrics for the film, released to minimum acclaim in early '67.

This recognisable style of Fuest’s was later apparent in The Abominable Dr Phibes (1971), with a suitably over-the-top Vincent Price out for revenge on a string of doctors who failed to save his wife’s life (very-Avengers storyline), but a better film and one with even more Avengers-related credits (screenplay by Brian Clemens and Terry Nation, produced by Albert Fennell and Terry Nation, music by Laurie Johnson, directed by Fuest) is And Soon The Darkness (1970). Stripped of garish sets and light-hearted fun, this straight, minimalist thriller is set in rural France where two holidaying girls on bicycles are followed by a mysterious French mod bloke on a Lambretta SX150, when one girl (Frank Spencer’s Betty, Michelle Dotrice) disappears…

Back to Just Like A Woman, it’s not the greatest film you’ll ever watch but visually it’s a treat and packed with fab little scenes and details. See full film below.

Many thanks to Melissa from In With The In Crowd shop for tipping me the wink.