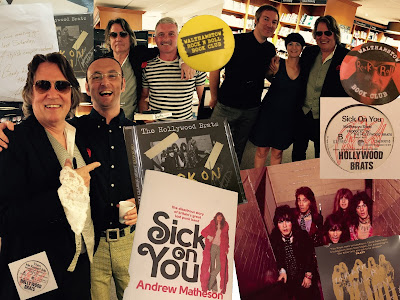 In the introduction to Sick On You, Andrew Matheson’s account of the trials and tribulations of The Hollywood Brats, his early 70s band who in poverty and cocktail dresses flirted with success only for success to ungraciously slam the door on their lipstick smeared faces, he outlines, on the very first page, the unbreakable rules for a rock ‘n’ roll band.

In summary, (1) The band should have four or five members; (2) The singer sings. “That’s it. If the singer can’t think what to do with himself during a bandmate’s solo he should consider a career as a bank teller”; (3) This is an important one. “Great hair, straight hair, is a must and is non-negotiable. If a member starts going thin on top put an ad in Melody Maker immediately”; (4) No facial hair. “Jerry Garcia is no sane, recently showered girl’s idea of a pin-up”; and (5) No girlfriends. “Two words: Yoko and Ono”.

This was 1971 but those rules should still be adhered to. I bristle with discomfort every time Shindig! magazine feature a beard on their front cover, which is all too frequently. So, naturally, I felt a huge sense of kinship with the Brats and Matheson’s ideals which increased throughout the book when he envisaged the band thus: “The sound we hear in our joint 45rpm cerebral cortex is a guitar with six Vietnamese razor-wire strings played by a great-looking madman whipped on by a rhythm section playing at blitzkrieg speed behind a mouthy vocal screeching the gospel.” Sign these boys up!

Only no one did sign them up. Well, that’s not entirely true, they were signed but not to a record company headed by their hero Andrew Loog Oldham’s mate as they thought - contracts? Pah! Who reads those? – but to a production company who although got the band recording an album at Olympic Studios, following in the Stones’ snakeskin boot-steps with photographs by Gered Mankowitz to match, were in fact a business run on behalf the Krays whose incarceration was a mere inconvenience. A fact which scared any and every prospective record label in the land to say no quicker than if they’d been asked if they’d called Ronnie a fat poofter.

Not that the total lack of success (if you discount the 563 copies of their LP which belatedly limped out in Norway after the band had disintegrated) makes Matheson’s book any less engaging. Far from it: the disasters and mishaps; the eels and the rats; the broken teeth and broken locks; the Detol and the dogs; and the shoulder rubbing with a motley crew of friends and foes only adds to the frankly ludicrous story. Oh, I nearly forgot, The Hollywood Brats’ music did, on occasion, like their anthem-that-never-was ‘Sick On You’, deliver everything they dreamed about. Seething, searing, rock ‘n’ roll that grabs ya by the balls and gives them an almighty squeeze.

The Walthamstow Rock & Roll Book Club is a marvellous thing. It’s not a traditional book club in the sense people read a nominated work and then sit around in a knitting circle dissecting it, rather it’s run by Mark Hart, a Fall fanatic and local music nut, who takes it upon himself to lure authors to travel to the end of the tube network to talk about their creation. Recent guests have included Stuart Cosgrove, Luke Haines, David Hepworth, Bob Stanley and Kevin Cummins. It’s held upstairs in Waterstone’s bookshop but bafflingly they do very little, if anything, to promote it. There’s not even a chalkboard mention outside or felt-tip scrawled poster Sellotaped to the window. By the time the events begin the shop is shut and those who haven’t been previously are put through an initiation test whereby they have to peer through the locked glass-door and give the last remaining member of staff, Simon, a discreet raised eyebrow and slight nod of the head before he unlocks the castle and escorts them up the stairs where chairs are set up, plastic cups of wine issued, and badges freely distributed.

As well as being master of ceremonies and gregarious interviewer Mark always asks for suggestions for who he should invite into the fold. My brilliant idea, a few months back, was Andrew Matheson and despite Mark, like the vast majority of the population, having heard of neither the author or his band, read the book and was similarly convinced Andrew would make an entertaining visitor. A spot of skulduggery and jiggery-pokery later and with a deluxe two-CD edition of the Hollywood Brats recordings issued by Cherry Red and a new edition of the paperback out on Ebury (both entitled Sick On You) needlessly cluttering shop shelves, Andrew was back in the ‘Stow for the first time since the Brats rehearsed here in ‘73 and watched the New York Dolls (“philosophical allies aligned against all the dinosaurs of this world”) on the Old Grey Whistle Test in a nearby tower block.

For over an hour Andrew chatted to Mark, who made a grand job of keeping him more or less under control, and then answered audience questions. Andrew was every bit as funny, opinionated, stylish, roguishly charming and spotlight-hungry as readers of his book would expect. You can watch for yourself below as the story of unfolds of working in the Canadian mines, coming back to Britain, boshing Freddie Mercury in his knashers, and linking the Andrew Loog Oldham Immediate Records period to the Malcolm McLaren and Sex Pistols/Clash one. “Malcolm said ‘Sick On You’ and t-shirts were the future. I underestimated him.” Andrew had little praise for any band other than the Kinks and remains true to his original template. When asked what he thought of the MC5 he shouted for security to remove the questioner. “The hair! The perm! Remember the rules: straight hair!”

Afterwards Andrew signed some books, had photographs taken - “let me put my sunglasses back on first” - and even joined most of the audience over the pub (the pub the Krays firm hot-footed it to, eager to get off their own manor, straight after the murder of George Cornell in Whitechapel, there's no escape Andrew...) for a beer and natter about Shadows of Knight LPs and Vox teardrop guitars before his driver, circling the mean streets of E17 in a two-year old Merc, collected him and whisked him home. Quite what Matheson has been doing for most of the in-between years, apart from carpentry, building a house and writing the soundtrack for a trucking movie circa 1980, he kept close to his chest.

A natural raconteur and utter gentleman throughout, it was noticeable how Andrew made a point of personally introducing himself and saying goodbye to everyone individually, and one obviously enjoying every second of this fresh, unexpected wind of discovery. Rock and roll missed out on a great character in the 70s but with a BBC documentary and major film to come (“It’ll be shit,” stated Mark Hart to the general agreement of everybody present) the Hollywood Brats’ time is perhaps still to come. During discussion in the pub about a reformation he was fairly non-committal, saying they’d turned down lucrative offers. It would have to be good I suggested. “No, it’d have to be better than good. My standards are up here…” said Andrew, raising an extravagantly lacy and over-sized shirt cuff to the ceiling.
For details of the Walthamstow Rock & Roll Book Club follow them on Twitter or find them on Facebook.

Many thanks to Mark Hart and, of course, Andrew Matheson.