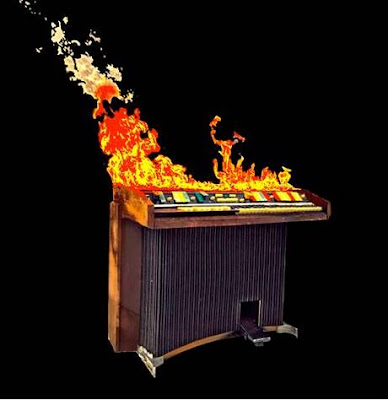 The organ bursting into flames depicted on Paul Orwell Presents Organized Blues won’t win any award for design but amply illustrates what’s inside the sleeve of Orwell’s latest album; the dozen tracks baked to the heavy vinyl of his second LP will singe the ears and limbs of unprepared listeners.

Last year’s spectacular debut Blowing Your Mind Away covered much ground – from Spectoresque pop to freakbeat phantoms – but here Orwell, mindful of his claim to be an artist rather than genre, takes a different approach and serves up a whole LP of fiery instrumentals.

When creating an album of instrumentals there can be a temptation to make it like an imaginary film soundtrack with different moods conjuring open-top sports cars coasting around the alps, a love scene, a chase, a fight and the obligatory club scene. Not so here as Orwell goes straight to the club scene and keeps the dancefloor packed for the duration. It’s breathless stuff, played at a frenetic pace, causing old studio engineers in white lab coats to pull out what remains of their hair as Orwell records everything into the red. More organ! Louder! More!

‘Don’t Do As I Do (Just Do As I Say)’ sets the pace, teetering on the very edge of distortion until a guitar solo sears through the track; ‘The Wild Walk’ is the sound of go-go dancers jiggling down the street; ‘Grave Robber’ is ‘C.C. Rider’ rode on the fastest horse out of town; ‘Ten Pieces of Ice’ could be the Prisoners playing ‘In The Midnight Hour’ after mainlining amphetamines; ‘Stiletto’ might’ve been how Booker T. & the MGs would’ve played with pointy heels stamping on their toes; and ‘Action’ is Memphis Soul Stew brought to the boil. And that’s simply half of it.

Like a budding Alan Hawkshaw, Paul Orwell has created the soundtrack to the hottest, most swingin’ party imaginable. Warning: please ensure all combustible material is stored in a safe place for the duration of this record. Paul Orwell’s on fire.

Paul Orwell Presents Organized Blues is out now on Heavy Soul Records. Vinyl only. Very few copies left so be quick!
Posted by Monkey at 20:26