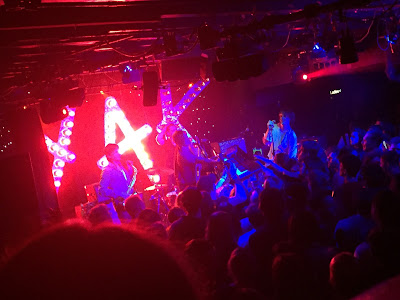 The merchandise stall is selling ‘Yak As Fuck’ t-shirts. Twenty-five summers ago my mate Clive wore his Inspiral Carpets ‘Cool As Fuck’ top to the pub. The landlord came over. “Would you mind putting your jacket back on sir, there are ladies present.” He was obviously lying, we were in Uxbridge.

Stood in the maelstrom of this Yak gig loads of memories, of gigs and bands on the cusp of ‘making it’, spring to mind. Some did, most didn’t, but there’s a moment when bands and their audience are gloriously entwined. Yak are at that point.

The pulsating punk rock juggernaut ‘Harbour The Feeling’ starts the show. Oli turns from the crowd then falls backwards into it. He’s held up and bashes his guitar as the rhythm section furiously beat themselves like teenagers left home alone. Some older dude called Martin joins with a saxophone and merrily squawks and squeals until his heart’s content.

Yak make a glorious bloody racket. A juttering, gut-punching, screeching, stabbing, trashing, twisted noise akin to terrified passengers trapped on a rickety coach driven by a lunatics hurtling towards the cliff’s edge while listening to Sonic Youth, Albert Ayler, the Stooges and Public Image Limited all at the same time. Backwards. At top volume.

Dingwalls, with its low ceiling and low stage, is the perfect environment. It’s a sweatbox and allows Jagger-lipped Oli to surf the crowd at will. He doesn’t speak between songs but controls the cacophony on stage and the chaos off it. With a few flicks of his wrist his flock part the sea of bodies, the music drops to a heavy rumble, an empty space appears in the crowd, another flick and it’s widened. Oli looks about to launch into the abyss but the band snap into a blistering frenzy of white noise and the gap fills with ricocheting bodies.

‘Victorious (National Anthem)’ and especially ‘Use Somebody’ have noticeable rusty hooks and even a slightly baggy rhythm lurks within ‘Take It’ but elsewhere what old folk like me might call ‘proper songs’ are abandoned and replaced with freeform brutality. Don’t fight it, feel it. Ride the Yak.

Oli grabs a nearby tourist and yanks him by his backback on to the stage. The lad looks petrified and pleads his innocence. Oli takes off his guitar, straps it around Billy Backback and goes flying on to the tops of boys, girls and photographers. Wide-eyed Billy gets the message and flails away at the strings. There’s no discernible difference in sound from what preceded it. Another other kid has a go and acts out his Cobain fantasy. A mic stand nearly takes my eye out, a keyboard appears and disappears. It’s not even the climax. They start another song.

I’m knackered. Happily shagged out. These are the good times. Yak will soon leave these size gigs behind. The distance - physically and otherwise - from their audience will grow. We’ve all seen it happen, it’s inescapable, a by-product of success. Either that or they’ll burn out. Whatever, this is the moment. Trust me son.

I decide a ‘Yak As Fuck’ t-shirt would be unbecoming of a gentleman but do purchase their new long-playing gramophone record, Alas Salvation. The cover painting appears to represent an array of pink cocks and hairy balls in group orgasm, which is nice. Yak as fuck. 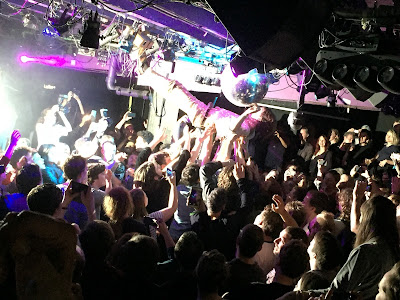