“A lot of the stuff sounds like it’s been turned out on a computerized conveyor belt” That was the assessment of BBC’s Roundabout show of the hundreds of records (sorry, “discs”) being released in 1966.

BBC’s Keith Harrison can barely contain his disdain for this piffling pop business as he opens his interview with lead singer of Tunbridge Wells’ Tony’s Defenders - Tony Diamond - with the assertion that "a lot of people listening right now wouldn’t call this music”.  Nice opening gambit Keith, who then goes on to compare the band to the Walker Brothers after telling Tony off-air he wouldn’t.

It’s a fascination snap-shot of attitudes of the time and of life in an upcoming pop combo. The disc in question, ‘Since I Lost You Baby’, is, despite what old cloth-ears says, a real beauty (dunno how the beeb would've coped with some of the more innovative records coming out in '66) and would crop up again two years later on the flip of Long John Baldry's 'Hold Back The Daybreak'. It was composed by songwriters Tony Macauley and John Macleod who between them had hands in many hits of the day including 'Baby Now That I've Found You', 'Sorry Suzanne', 'Let The Heartaches Begin' and Scott Walker's 'The Lights of Cincinnati'.

Tony's Defenders, who'd already released the modbeat ‘Yes I Do’ for Columbia, folded soon after the commercial failure of 'Since I Lost You Baby'. Guitarist Brian Bennett joined the Mike Stuart Span, the rest presumably found proper jobs. 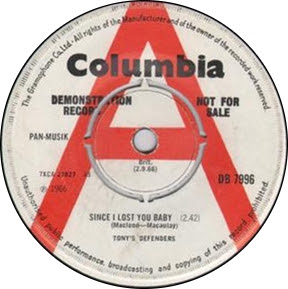