BILLY CHILDISH & CTMF - A GLIMPSE OF ANOTHER TIME EP and THE BALLAD OF THE ST. JOHN'S TAVERN 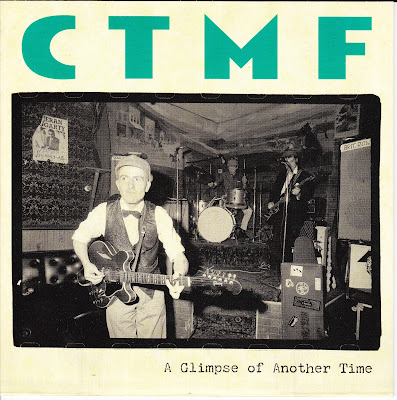 Billy Childish last week released his 983rd record in the shape of a new four-track EP on Damaged Goods under his current band name, CTMF. What makes this particularly waxing interesting to me is how the title track, ‘A Glimpse of Another Time’, pays tribute to a little piece of unsung London gigging history; that of the Wild Western Room at the St. John’s Tavern in Archway, North London.

“Friday nights, we would play, under the gaze of the IRA. A wagon wheel and a cowboy scene, the JCB man smiling at me. It was a glimpse of another time.”

The cover photograph by Paul Slattery shows Billy fronting Thee Headcoats in their deerstalking glory at the Tavern in 1991. It was an odd little place containing two very different scenes. The main pub was a smoky, tatty, weather-beaten old boozer which a few smoky, tatty, weather-beaten old Irishmen rattled around in. The back room, the Wild Western Room, with its wagon wheel on the ceiling, badly painted cowboy scene on the wall and a giant pair of bull’s horns stuck above the tiny tiered stage built into the corner was the domain, during the week, of a character who operated under the name Slim Chance.

“Slim’s hammer was under the table, […] the PA was on top of the table, some drunken idiot just pulled out the cable. It was a glimpse of another time.”

I never knew Slim’s background and thought it best not to ask too many questions but he put on hundreds of gigs in that place. He was quite a bit older than us, and a lot more lived in: he had faded homemade tattoos on his skinny arms and scraggly curly hair which made him look like a wirier Ian Hunter. The rougher and readier, the more garagey, the more punk, the more outsiderish, the better for Slim. He championed bands other promoters wouldn’t touch and was content to repeatedly book bands who didn’t have a hope in hell of bringing in many punters. Quite how much acts got paid, if at all, was subject to a baffling collection of variables that only Slim could calculate.

“The Armitage Shanks, they were there, the Riot Gurls with boy-cut hair, the Guaranteed Ugly were smiling through, the Fire Department and the audience few. It was a glimpse of another time.”

He’d put on mod type bands, and the 60’s pop-pysch stuff but Thee Headcoats epitomized Slim’s ethos and were the venue’s “star” attraction. It was no bullshit rock & roll, where spirit and attitude counted and musicianship was largely irrelevant. Thee Headcoats were one of only a few bands who drew decent attendances despite nights which featured three or four bands of roughly similar ilk.

My mates and I saw a lot of gigs there in the early to mid-90s and it was a definite influence on starting our own band. If these groups can get away with it so can we, was the thought. And that turned out to be the case with The Electric Fayre. I wasn’t a big fan of Thee Headcoats or Armitage Shanks (did like the Guaranteed Ugly though who we played with) but seeing crudely minimalist bands like that did provide inspiration, or rather courage, to learn three chords and stand there in public and loosely play them repeatedly.

Almost the only time we played gigs out of Uxbridge was for Slim who was unfazed by our incompetence and was always encouraging. We played there every few weeks for a while; I think on one occasion to five people. Slim didn’t mind and still booked us. We were cheap I suppose. “Give it six months and you lot will be really good” he said once. A prophesy that remained unfulfilled. For reasons never explained one day Slim did a bunk. He dumped his contact book on Paul ‘PJ’ Crittenden, who was helping with the gigs now the nights had moved down the road to a bigger location at the Boston Arms under the Dirty Water banner, and vanished into the night, never to be seen or heard of again. All very mysterious.

Those nights at the St John’s Tavern didn’t feel like anything particularly earth-shattering and were taken for granted but can now - with the benefit of hindsight, and nostrils free from the stench of those concrete, freezing toilets - be looked back on fondly. London’s venues for bands starting out with little or no audience are disappearing week by week. It was, indeed, another time.

I walked past the Tavern a couple of months ago and was pleased it’s still a pub but the IRA, the JCB man and fans of Cee Bee Beaumont would not have recognised the place which now serves “Trout fillet with Crayfish Sauce and White Chocolate Brûlé” instead of garage punk at such distorted volume. As for Billy Childish, his records don’t date; they exist in their own time zone. I’m not one to suggest they all sound the same but his latest EP isn’t a million miles away from the sound he made in the Wild Western Room; in fact it doesn’t even stylistically travel as far as Archway tube station. And that is bloody remarkable in so many ways.

A Glimpse of Another Time EP by CTMF is out now on Damaged Goods Records.
Lyrics quoted above by Billy Childish.